All about the Green woodpecker In the UK, they are resident all-year-round and can be observed in most parts of Britain, apart from those northernmost extremities in the Scottish Highlands & Islands, and all of Northern Ireland.

Green woodpeckers are mostly solitary creatures, and may only roost close to each other, rather than together. Pairs of Green woodpeckers bond in March, and can be alone for most of the remainder of the year. They breed in late-April, and it is the duty of both sexes to incubate the eggs. They are different from the other UK-resident woodpecker counterparts in that their bills are somewhat soft, perfect for chipping away at old, rotting wood. By extension, they are incapable of drumming to communicate, a common behaviour among Great spotted woodpeckers.

The current UK population of Green woodpeckers, according to the RSPB, is relatively static at 52,000 breeding pairs, although there is a well-known current downwards population trajectory, partly attributed to loss of woodland and heath land.

Green woodpeckers avidly consume ants; lots of ants. In fact, they spend such an incredible amount of time on the ground searching for their favourite food that, according to the RSPB, you will often find them rummaging around in parks and on garden lawns – short grass provides the ideal feeding grounds for Green woodpeckers. They will also eat caterpillars and beetles, and have a specially-adapted long “sticky tongue” which serves the purpose of extracting bugs from the cracks and crevices of old, rotting trees.

An ideal niche, which conjures up the image of Darwin’s gradually lengthening Finch bills from the Galapagos Islands.

“Describe the tongue of a Woodpecker,” from Leonardo Da Vinci’s notebooks on his list of things to do.

Green woodpeckers prefer to nest in the holes of old deciduous trees (oak, beech and willow), whose location is nearby feeding grounds with delights such as ants and caterpillars. It is commonplace for Green woodpeckers to hollow out and extract the insides within a circumference of 60mm x 75mm of a rotting trunk, the inside of which is dug to a depth of 400mm (*Wikipedia). Interestingly, the arduous task of excavation is performed by the male alone and is conducted over a lengthy period of 15-30 days. This work-intense method is often worth the effort, as a hole crafted by the hands of a Green woodpecker can last as long as 10 years.

In terms of breeding, Green woodpeckers begin their breeding process late on in April and produce, on average, 2 clutches per season. These clutches each yield between 4 to 9 eggs, and continue into an incubation period which lasts around 19 days before fledging for approximately 25 days.

Green woodpeckers do not feature too prominently among the annals of human culture and history; yet, they do have their moments. Take Professor Yaffle, for instance, whose character from Bagpuss is loosely based on the Green woodpecker; and, of course, those of you who drink Woodpecker cider, or remember drinking it, should be able to recall the brand’s logo, which uses the Green woodpecker as its main image. The naming convention, from Greek and Latin, is quite straightforward with pikos meaning “woodpecker” and viridis meaning “green”: quite an uninteresting direct translation, but nonetheless to the point.

What’s the difference between a male and female Green woodpecker?

The difference between male and females Green woodpecker is quite easy to identify. Simply refer to the red moustachial stripe on the lower cheek, and you’ve found the male. Despite this, almost all other features of the two birds are identical. 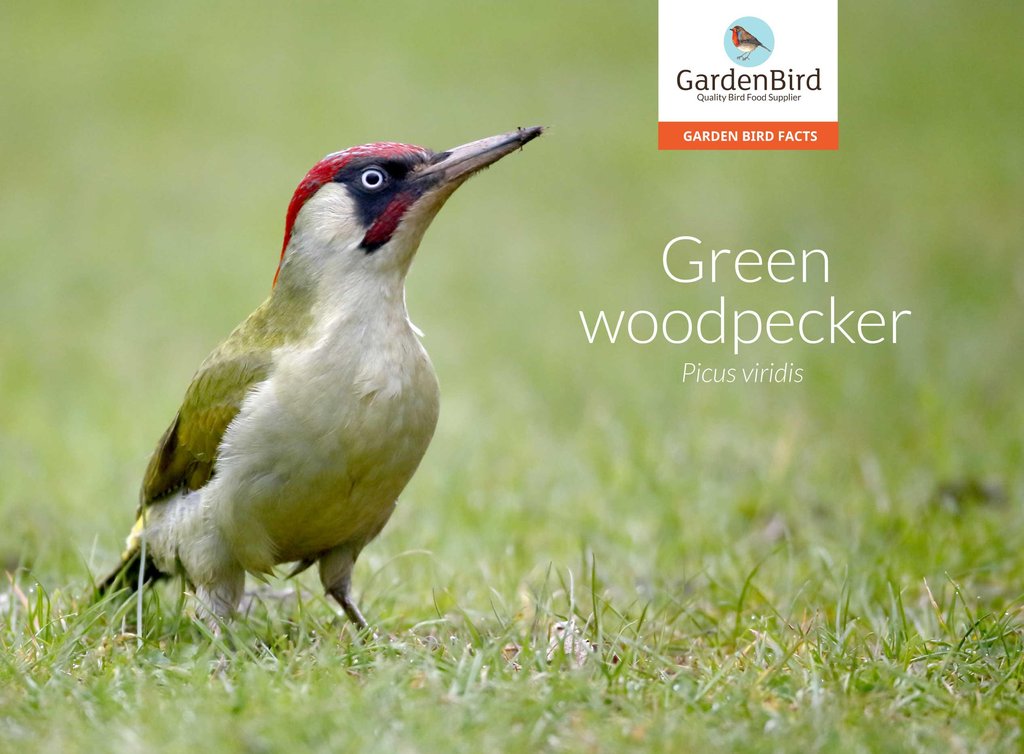 Attract Woodpeckers with the following food

Dried mealworms are the perfect nutritional food for your garden birds. Try soaking them in water over night for an extra juicy treat for your Firecrests. Insect suet blocks are made from high-quality suet blended with a mixture of dried insect, providing an instant energy boost for your garden birds. These high quality energy-rich suet cakes are the perfect treat for your garden birds, specially blended with dried mealworm for added nutritional value.