All about the Kingfisher

In the UK, there is just one species of Kingfisher, the common kingfisher (Alcedo atthis). Its beautiful, metallic blue and orange plumage stands out prominently, and its fast, swooping motion is incredible as it dives towards water to collect fish. They seem the ideal hunter, flying rapidly, eying prey closely and exacting the right moment for capturing their target with immense precision. Those rivers with overhanging branches make for ideal perches upon which kingfishers may begin their hunt for prey.

It is part of the Alcedinidae family, which extends around the world and contains numerous varieties. Interestingly, most kingfishers around the world are quite unlike our UK variety, whose habit it is to live closer to water than to land. In fact, you will find that in the UK, Kingfishers tend to favour slow-flowing rivers or motionless water in relatively lowland areas; perhaps the slow-moving water provides greater visibility for the Kingfisher to spot fish: moving too quickly, the water would create a gargling, bubbling, or even swirling, mass on the surface, preventing the bird from seeing a clear view of any fish swimming beneath.

Kingfishers are resident all year round in the UK, although they may exhibit some short migratory behaviour, for instance over harsh winters they may migrate near to coastal areas, but rarely further than that.

They can be observed in many parts of England, Wales and Northern Ireland, though only in southern and eastern areas of Scotland all year round. On the Isle of Man, they are passing migrants only.

Listed as Amber status on the Birds of Conservation Concern list (BoCC), Kingfishers are particularly vulnerable to habitat degradation and watercourse pollution. In fact, the long-time population decline since 1970 is, according to the RSPB, due primarily to river pollution, especially those near industrial towns and cities. Such heavily polluted rivers tend not to be home to significant populations of fish, and hence do not attract kingfishers.

The contemporary Latinate name is derived from the Latin terms alcedo, which means “kingfisher”, and Atthis, the name of a young woman from the island of Lesbos, a favourite of Sappho, the famous ancient Greek poet. Kingfishers are unlikely ever to be seen in a garden, unless the garden is large enough to be home to a large flowing river. Their favoured food includes fish that are approximately 23mm in length (RSPB), although they have been observed to consume fish up to 80mm long. Look out for rivers with minnows and sticklebacks, as these are fish the Kingfisher most enjoys. If supply of these is low, Kingfishers will happily top up on aquatics insects, shrimps and tadpoles.

To survive, a Kingfisher must consume its own body weight in fish each and every day.

Kingfishers do not build a nest, as is common among most species of birds. Instead, they nest inside a tunnel, which is typically around 30-90cm in length, located next to a river bank of slow-moving water, and contains no other materials i.e. there is no lining for the tunnel.

Breeding begins in late, and it’s common for between 2 – 3 clutches to be produced, each containing 6 – 7 eggs, which are smooth, white and glossy. In length, they are approximately 23mm, and in width 20mm. Both males and females take turns at incubating the eggs, and feeding is shared. 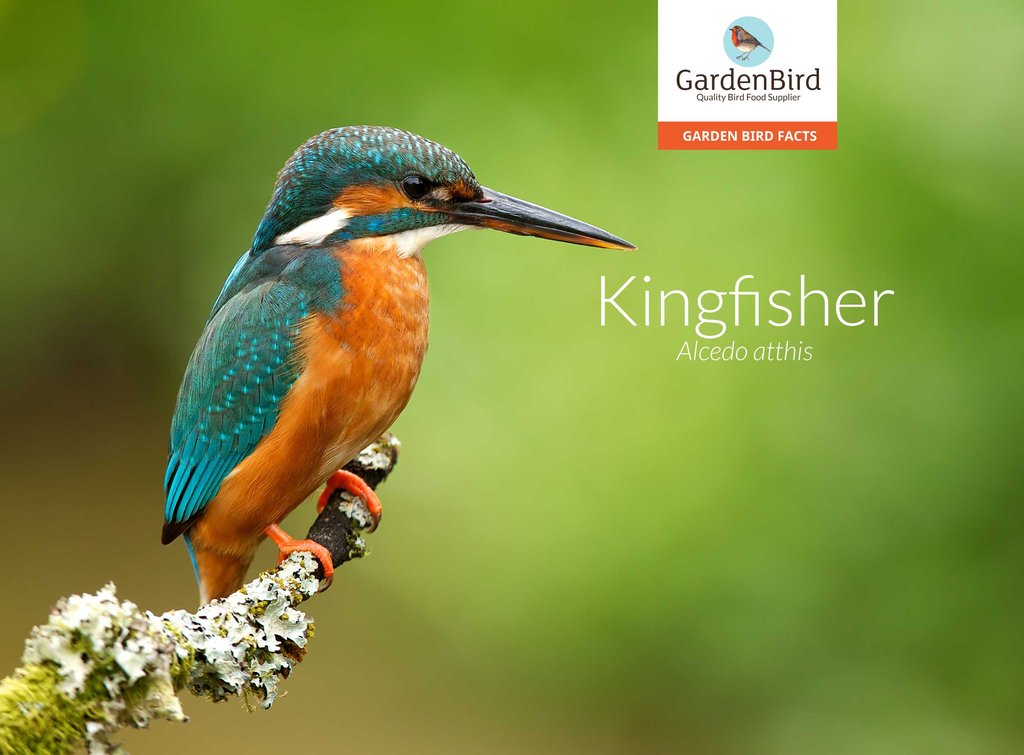 Attract birds to your garden with our top food picks