All about the Redstart

Redstarts used to be part of the chat and thrush (Turdidae) family, which includes Blackbirds, Robins and Song thrushes, but are now classified as an Old World flycatcher (Muscicpidae). They are quite petite, only around the same size as a Robin. As summer visitors to the UK, they can be observed in north and west of the UK, with higher concentrations in Wales; it is possible to view them as far north as the extreme of Scotland. There are approximately 100,000 breeding pairs, which is a relatively low number in comparison to more common UK birds: Robins, for instance, number approximately 6,700,000 breeding pairs in the UK.

Similar in appearance to a Robin (one comment suggesting a Redstart is like a “Ninja Robin”, with its striking dark black band across the front of the face). The males, however, are very “smart” in appearance, with an orange rump and chest, and a grey upperpart covering on top. Females, to the contrary, are slightly duller with less emphasis on such bright red colouring, a principal characteristic of males.

Unfortunately, Redstarts are a declining species and, as such, have been classified on the Amber List as a species in decline.

It would be easy to look at the Latinate term Phoenicurus phoenicurus and think of this as relating to sound (i.e. Phoenician); however, the Redstart doesn’t have a memorable song, and is somewhat a dull affair, which always ends in a feeble manner.

What Phoenicurus is, from its original translation, is a combination of two ancient Greek terms: “phoinix”, which means “red”, and “-ouros”, meaning “tailed”; so, a very straightforward name i.e. red-tailed, or, as it is known now, Redstart.

Redstarts favour environments with open oak and birch woodland, hedgerows and parkland; if the trees are suitably mature, they may contain holes which are usually ideal for nesting. In your garden, you will be hard-pressed to find one, but, if you do, there are some suggestions for potential bird food below.

They are only ever summer visitors to the UK, arriving in April from western Asia and northwest Africa (Morocco). They breed in Britain in upland broadleaf woodland areas and hedgerow trees. Once in the UK (males arrive a few days prior to females), they begin their breeding process and produce approximately five or six light blue-coloured eggs. Redstarts depart the UK around mid-August and return to their warmer climates in Africa and Asia for the winter.

What is the difference between a Common redstart and a Black redstart?

Redstarts have bright red underparts, black facial features and a smooth grey colouring that starts at the crown and ends at the tip of the tail. Black redstarts, in contrast, are much darker in colour, with only hints of red on the tail. See the difference below. 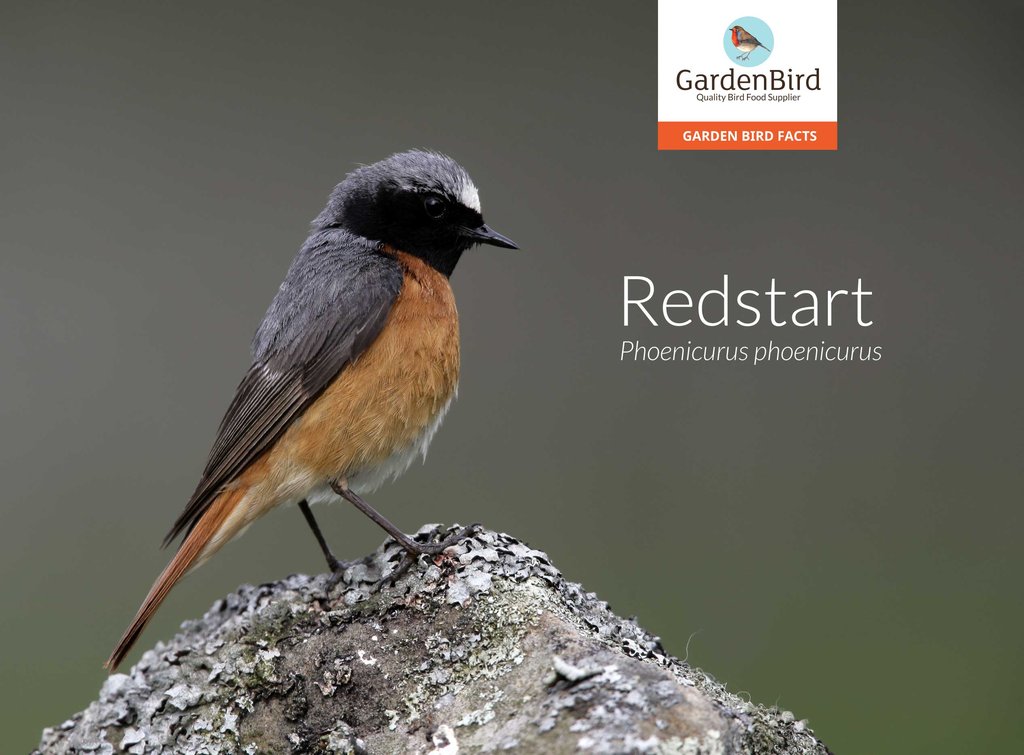 Peckaballs are high-energy treats that have a special high fat formula, can be used all year around and are perfect for all garden birds, particularly smaller birds.