Save onBird Food
All about the Blackbird

The common European Blackbird is one of the most intensely productive birds in the UK, with approximately 6,000,000 breeding pairs. It’s Latinate name, Turdus merula is a binomial name deriving from two Latin parts: Turdus ‘thrush’ and merula ‘Blackbird’. There are around 65 species of thrushes, which are categorised according to their song, rounded heads and pointed wings. The common Blackbird we know in the UK looks to have evolved from the Island Thrush in South East Asia.

Most people would imagine a Blackbird as the frequent ground-feeding bird in our gardens, the bird with a striking deep-black plumage, yellow beak and similarly-coloured ring around each eye. However, both juvenile and female varieties are quite different, displaying an intense reddish-brown plumage and dark-brown striped beak.

Most Blackbirds, even from an early age, seem to hop along the ground at a rapid scurry, foraging for food among leaves, soil and undergrowth. They are a gregarious bird and do not shy away easily around humans, although you are unlikely ever to see a Blackbird perch on your hand like the ever popular Robin.

The breeding season for Blackbirds begins in March and can last up to the end of July. Over the course of the breeding season, Blackbirds typically have between two and three broods, although as many as four have been recorded in the space of a single season. This, of course, is heavily dependent on weather, as dryer/wetter weather can have an impact on brood numbers.

In any one clutch, you can expect to see between 3 – 5 eggs. Once these hatch, around 14 days after being laid, most of the chicks are fed on earthworms (garden) and caterpillars (woodland) until they are ready to fledge, the primary responsibility of the male while the female prepares the nest for the next brood.

Blackbirds are a fiercely territorial bird, especially in smaller areas.  They’re not quite as aggressive as Robins, but still very stubborn about their ground. Rarely will a Blackbird stick to its territory for rich food pickings; often they will search afar for hearty sustenance.

In most cases, the territorial holdings will break down at the end of the final brood, after which many birds move to seek food in the countryside and other abundant food sources.

Blackbirds in the UK are resident all year round, although you’re far more likely to see them over winter, the breeding and fledgling seasons. Native numbers will swell considerably over winter when Scandinavian Blackbirds arrive for the slightly warmer climate, after which these northern European birds will return in early spring in time for the breeding season.

In 618 in Ireland, a little known man called Kevin (later St Kevin of Glendalough) was apparently in prayer in his monastery, when with outstretched hand a Blackbird flew down, built a nest and into which an egg was laid. According to legend, he was in such intense prayer with outstretched hands that the egg eventually hatched, and ever since he has been called the patron saint of the Blackbird.

Even Nobel Prize-winning poets have created odes to Kevin, in the form of Seamus Heaney’s St Kevin and the Blackbird. St Kevin of Glendalough, the patron saint of Blackbirds 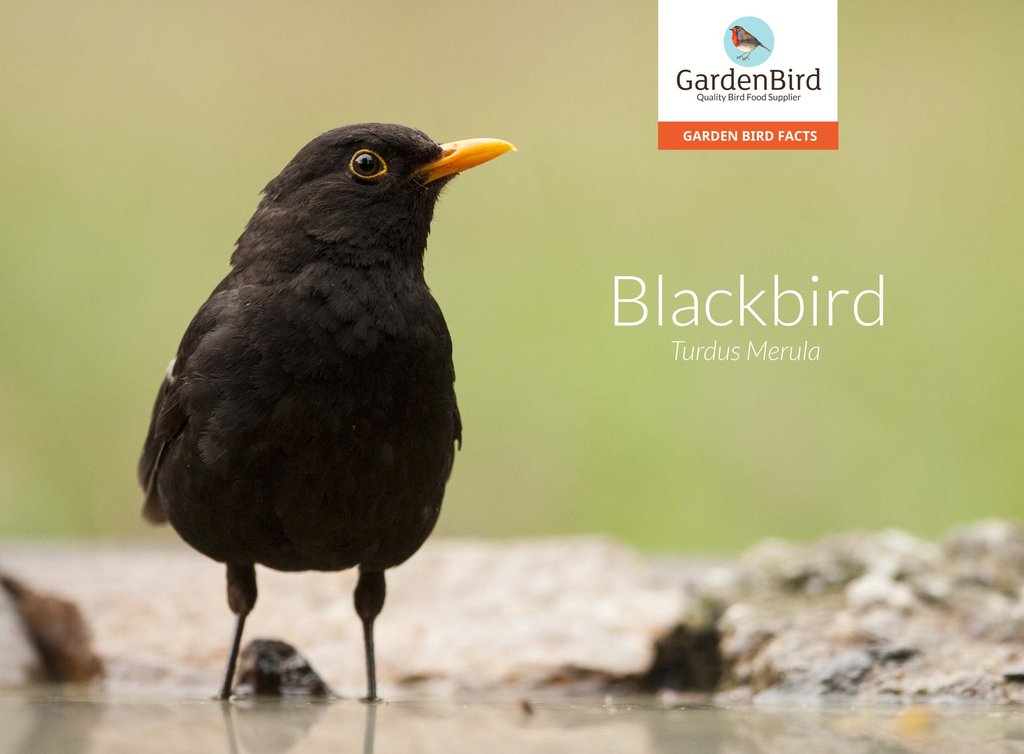 Dried mealworms are the perfect nutritional food for your garden birds. Ideal for attracting species such as Blue tits, Starlings and Blackbirds, dried mealworms can be soaked in water over night for an extra juicy treat.