Save onBird Food
All about the Brambling A highly gregarious winter bird that can be observed in flocks of many thousands, the Brambling is often seen in farmland fields and woodland, yet is characterised by its colourful plumage.

The plump-looking migratory bird, which is medium-sized (similar to the chaffinch) belongs to the Finches family. Its distinctive white rump and attractive orange breast makes it easy to spot alongside its harsh call ‘dzhweeee.’

Bramblings communicate vocally to establish breeding territory and social chatter is used in flight. The males in particular use song to attract mates so they can be extremely joyful to watch and listen to.

The brambling is an abundant species and is not considered to be threatened with extinction, therefore has a Green Status here in the UK and has no conservation measures in place.

Bramblings display behaviour sexual dimorphism, in which the males and females of the same species differ in appearance.

The male brambling has a jet black head during the summer (its breeding season) as well as a brown body, black wings and a black tail. Its long white rump and orange breast are particularly noticeable when in flight. The bill is black, or occasionally blue-grey.

However in wintertime, the male brambling has a mottled grey-brown head, dark brown wings and the bill is a pale yellow/orange colour with a black tip.

The female’s appearance is very similar to the non-breeding male though it is plainer in colour and has a more subdued orange breast and shoulders.

Juveniles look very similar to the female except the rump and belly are a tinged dull yellow, and it has a brown tinged head and upper parts.

As aforementioned, the Brambling is a winter bird so you can expect to see them from mid- September until March/April time. Occasionally the birds will stay in the UK up to May but then it will migrate to breed in Scandinavia and West Siberia.

Look for flocks of chaffinches in agricultural fields near woods but you can also find them closer to home, as they do tend to visit gardens.

Brambling’s diet in winter largely consists of fruit and seeds which means there is a high likelihood you can spot one in your garden visiting your bird feeder.

What is the Brambling’s nesting behaviour

Bramblings migrate to Scandinavia and West Siberia to breed from early May to August and, it is the male that takes the lead in terms of initiating the courtship. He does this with a wheezing song whilst perched prominently with his bill wide open- it really is an incredible sight to see!

It is the female that builds the nest and she does this using grass, feathers, hair, birch bark and moss.

Breeding usually takes place in the brambling’s first year and it’s the female that incubates the clutch of 5-7 eggs for around 11-12 days.

So keep your eyes peeled for the brambling as it embarks on its migration to the UK this month and if you see any, please send us your pictures and we’ll share them. 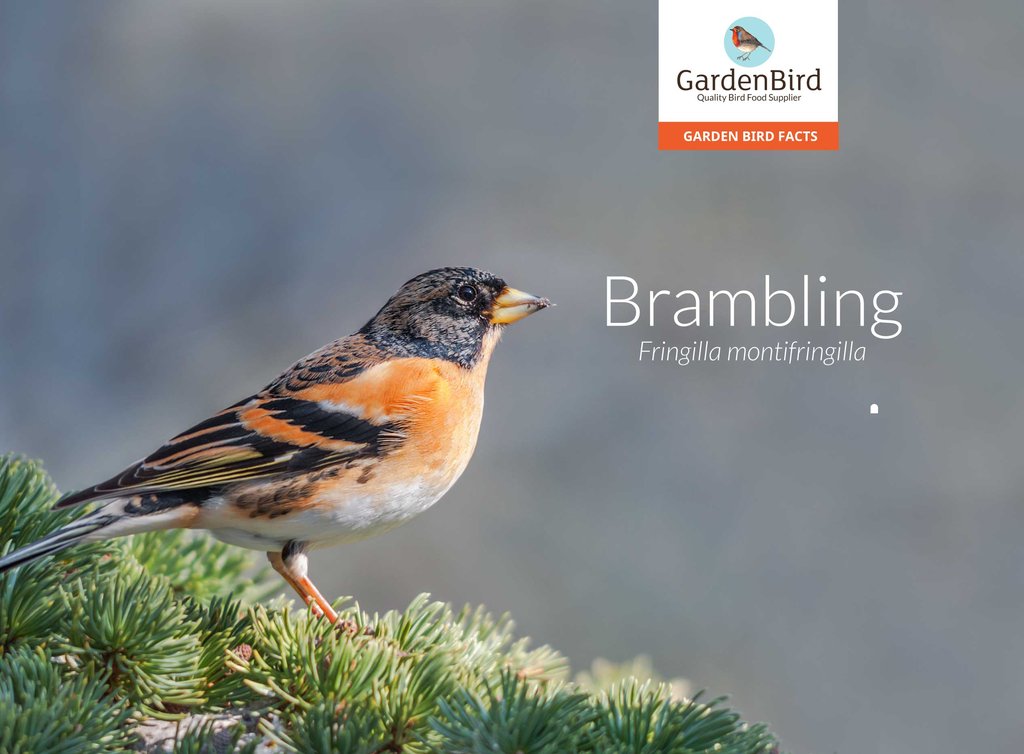 Attract Bramblings with the following food The GardenBird catalogue is our regular publication which features all the latest products, along with fantastic tips and articles into the world of your garden birds.