Despite its deceptively menacing look, in part thanks to a strong cultural perception of the macabre – think Omen 2, and the scene in which Joan Hart is attached by a Raven; yes, a different bird (Corvus corax), but perceived equally as somewhat ominous, which is, in fact, an unfair assumption. It has been established that the Carrion crow is among the most intelligent animals on earth; comparable, indeed, to the intellect of a chimpanzee. According to a study conducted by the National Geographic (see here), Crow brains are relatively the same size as Chimpanzee brains,” and the authors go on to suggest that Crows “think” about their social and physical environment, and that they use tools to gather food.

Apparently, pet crows express a unique sound for their owners. Yes, they give their owners a name.

Perhaps it is this intelligence that gives the Carrion crows its enigmatic yet ethereal demeanour – from both an actual and cultural point of view; Picture it perceptive, with focused eyes, slowly and steadily beating its wings as it maneuvers through the sky, with those “fingers” at the tips of its wings. They look, strangely, like human fingers in silhouette.

Carrion crows are also often confused with Rooks, whose beaks are stouter, more prominent and do not feature any bristles or hair. Interestingly, unlike Rooks, which are generally very sociable and gregarious birds, Carrion crows are more solitary in nature, although this can change to some degree over winter.

Although at first sight it is easy to see the Carrion crow as having a uniform black plumage, this isn’t the case. Look closer, and you will notice a subtle green and purple sheen that is really rather attractive. And they have neatly feathered thighs and feathers around the base of their beaks.

“Raven crow” is the literal translation of Corvus corone.

The Latinate binomial name, Corvus corone, is derived from both Latin (Corvus) and Greek (Corone). The genus, “Corvus”, can be translated as “Raven”, and “Corone” means crow; therefore, “Raven crow” is the literal translation of Corvus corone.

What do Carrion crows eat?

“Crows are known to sunbathe for a dose of Vitamin D.

Carrion crows eat a substantial variety of food; in fact, the count thus far is at around 1,000 different items. Some of these include, but are not exclusive to, young chicks, eggs, meat, seeds, scraps and worms. They have been known for tearing violently at smaller, less aggressive birds; one of their techniques is to stun smaller birds before consuming them.

In your garden, you could probably put out just about anything in order to attract them.

Carrion crows are well known for their solitary nesting behaviour, although they do maintain extensive breeding territories around their nests. Interestingly, Carrion crows work collectively to provide protection from predators and other intruders.

They do exhibit a specific behaviour of resting upon some prominent perch, such as a chimney pot or television aerial, vocalising quite loudly with a series of harsh, timed croaks. 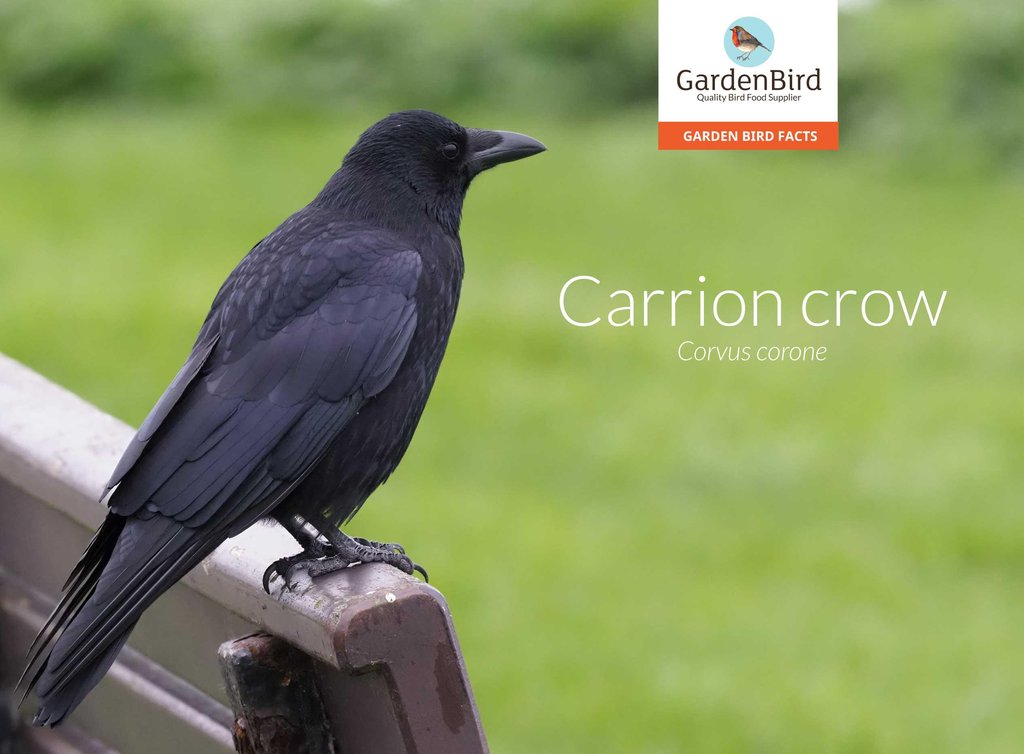 Ravens are huge birds, by far the biggest in the crow family (55 – 67cm in length), and their all-black appearance gives them a somewhat ominous appearance; Carrion crows (48 – 52cm in length), on the other hand, are archetypal crows: uniform black body, large protruding beak, yet a beak much smaller than that of the Raven. Take a look at the difference below.

What’s the difference between a Carrion crow and a Raven? This hugely popular bird seed mix has been at the forefront of GardenBird for many years. A top seller, the inspiration came from a missing link in the bird food chain.