Save onBird Food
All about the Crested tit

Yes, it most certainly is possible. In fact, there has been a spate of recent sightings, but only in gardens with a close proximity to the Caledonian Forest i.e. in residentials areas in and around places such as Strathspey. Their frequency of appearance, though, is limited compared with more common garden bird species. Look no further than the head of a Crested tit, and you’ll see immediately the famous upswept, peaked tuft on top; a crown, so to speak, and perhaps even a display of its preeminence as possible king of the Caledonian Forest.

In Scotland, there exists between just 1,000 – 2,000 breeding pairs in total. This number can inflate to as many as 9,000 birds over the winter period due to migration from other parts of Europe. Interestingly, there are vastly more Crested tits in mainland Europe than the UK, and the distribution is considerably wide – from the Iberian Peninsula, stretching through the northern, southern and central bulk of Europe, through Turkey and into Asia.

Nests are formed into a cup shape, built entirely by females, and crafted using moss and lichen, which is ultimately lined with a combination of hair, wool and spiders’ webs. These are almost exclusively built in rotten pine trees, out of which a suitable cavity is excavated, although sometimes, though not often, a Crested tit may nest in a hole in the ground.

Breeding begins in April and usually only results in a single clutch consisting of between 4-8 eggs. The period of incubation lasts for 13-16 days, with a subsequent fledging period of 17-21 days, after which time around 3 weeks is taken to become a fully independent “Crestie”.

The eggs are glossy, white and speckled with purplish-red blotches. They are roughly 1.6cm x 1.3cm.

Crested tits feeds mainly on invertebrates (including caterpillars) and pine seeds, doing so while clinging to the sides of tree trunks and hanging from branches. Some of this food, such as moth larvae, is hoarded extensively in Autumn to prepare for the possibility of scarce food supplies during harsh winter periods. If you’re lucky enough to receive a visiting Crested tit to your garden, it is advisable to put out suet-based foods that include insects or mealworms.

The Crested tit’s call is a somewhat soft and bubbly trill that, when repeated, becomes the bird’s song. You will be able to recognise it by listening for a “b’d-rrrr-rrup”, or the somewhat thinner-sounding “zit-zee”

The taxonomy of the term Lophophanes is derived from ancient Greek iophos (“crest”) and phaino (“to show”). The specific term cristatus is Latin for “crested”. 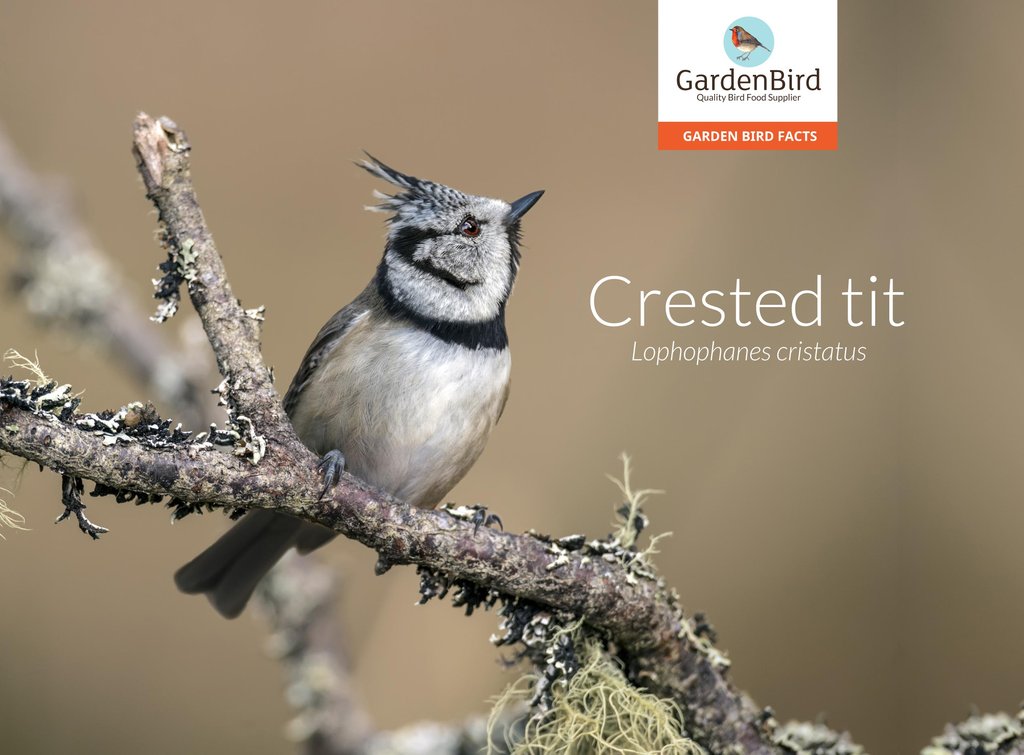