Save onBird Food
All about the Great tit

The Great tit is a highly gregarious and common garden bird. Related to the Blue tit, it features a prominent black crown with a characteristic black stripe down the throat and neck. With a yellow breast, olive green-tinged wings, and blue-ish tail, the Great tit is a very memorable bird.

In terms of taxonomy, the name Parus means “tit” and major means “larger”. Along with Cyanistes (of the Blue tit), Parus is associated with birds that display non-hoarding behaviour. It is the largest of the Tit family, just slightly smaller than a House sparrow, and displays behaviour that is common to larger birds i.e. ground feeding, which isn’t normally displayed among other birds of the tit family.

The Great tit song consists of a mechanical-sounding two-syllable song, which is comprised of single stuttering “pit”, “spick” and “chit” sounds. In terms of nesting, Great tits are known as a “cavity nester” species, meaning they often nest in crevices and holes in trees. Great tits are known for their intelligence; so much so, in fact, that scientists were startled to discover the Great tit habit of solving problems through insight rather than by trial and error.

A great example of this in practice was in England in 1921 when it was noted that Great tits successfully learned to take off the lids of milk bottles to obtain the cream from the top. They’ve even been known to use pine needles as tools for extracting larvae from holes in trees.

During the spring breeding period, Great tits prefer to feed mainly on insectivores, spiders and flies, as well as insects taken from leaves (known as foliage gleaning). This typical diet comprises a high protein-rich glut of food, which is preferable for feeding their young. Watch them closely as they are popular birds in the garden due to their acrobatic manoeuvres while feeding on seeds and nuts.

However, throughout the year Great tits have a tendency to switch over to seeds and fruits, mainly taken from deciduous trees and shrubs. Throughout winter, Great tits will feed mainly on seeds, and will relish whole peanuts and other supplementary garden bird food. Interestingly, during particularly harsh and cold winter periods, Great tits can eat up to 44% their body weight in sunflower hearts and seeds.

“Over winter, Great tits may consume 44% of their body weight in sunflower hearts”, Wikipedia.

Due to their size, Great tits have a greater propensity than other tits for feeding on the ground. Over winter, Great tits flock together with their Blue tit cousins in the search for food. This is a phenomenon known as mixed-species foraging.

Great tits seek out and discover breeding territory in January, and subsequently begin their defence of it. In the UK, breeding begins in April and May and the female will usually lay around 12 eggs. Both parents raise the chicks, and it’s quite typical for Great tits to raise two broods in a single year. Danger lurks around the corner, though, and their nests are often raided by woodpeckers, squirrels and weasels.

The chicks hatch blind and unfeathered, much like their Blue tit counterparts, yet once feathers grow the colour is very similar to that of their parents. This is quite unusual in that most chicks develop much duller-looking plumage throughout this early period.

Great tits reside primarily in woodland areas, yet have readily adapted to park and garden environments, making the Great tit a regular garden visitor all year round. They will generally maintain the same territory, generation to generation, unless severely disrupted, and they are typically a non-migratory species. Great tits have been known, however, to migrate in sudden irruptions due to very low temperatures in northern territories such as Scandinavia. 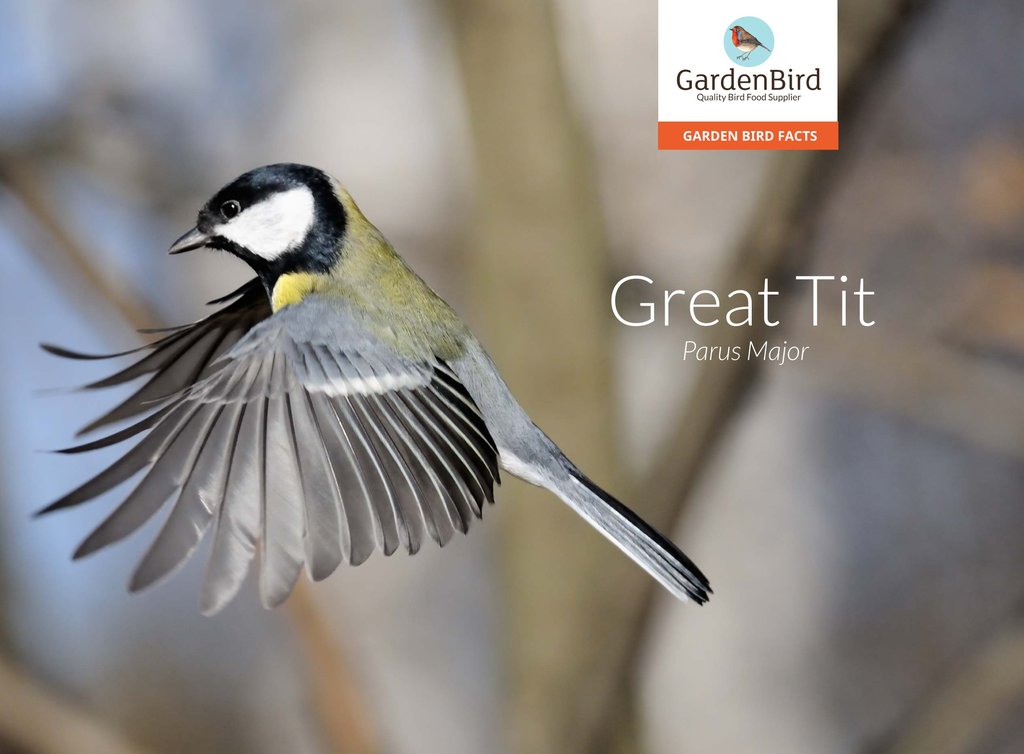