Save onBird Food
All about the Grey wagtail

Grey wagtails are resident all year in most parts of the UK and Ireland, winter visitors in others (from coastal areas of Yorkshire, down through East Anglia and much of Kent), and summer-only visitors in northern parts of the UK, such as Scotland. These summer migrants arrive in April and stay until September/October. In fact, they do not engage in migration in the ordinary sense i.e. simply form one place to another, but do so from an upland area (summer) to a lowland area (winter); such behaviour is known as “altitudinal migration”.

Greater densities of Grey wagtails can be located in hillier areas of England, like the Lake District, and over summer they have a preference for fast-flowing rivers. It is possible to observe them in cities and farmland over winter. They are also significantly widespread across the Palearctic realm, a biogeographic region that encompasses much of Europe, Asia, and even includes some of North Africa. Summer visitors (not resident varieties) to the UK spend their winters in the Africa. A Grey wagtail sitting in its preferred location beside a stream

As is normal for wagtails, Grey wagtails have a tendency to move their tails from left to right. You may also notice their unique flying pattern, which is to fly low in an undulating, bobbing manner; they often fly in this way while expressing their sharp, chipping calls. There’s a distinction between male and female Grey wagtails: males feature a bright yellow breast and black bib, while females are much less yellow and do not have the black bib.

In the garden it is possible to spot a Grey wagtail, though they are very few and far between. Should you see one, it is highly likely to have been drawn in by a specific water feature such as a pond. In fact, according to the RSPB, unless you have a stream running at the bottom of your garden, your best chance of attracting a Grey wagtail is to get out your spade and start digging a pond!

Grey wagtails are relatively rare birds with a population of just 38,000 breeding pairs in the UK. They are, subsequently, classified as Red Status due to this considerably low number.

The Latinate is a diminutive of “motare”, which means “to move about” i.e. characteristic of wagtails in general, and expressive of their tail movements. The second part of the name “cinerea” means “ash-grey”, a derivative of “cinis” or “ashes”.

Grey wagtails feed almost exclusively on aquatic-type insects and invertebrates, or similar such creatures found in and around rivers and streams: flies, beetles, crustacea and molluscs. In your garden, don’t expect them to take to feeders for bird food such as peanuts and sunflower heart, as these foods aren’t a part of their regular diet.

Grey wagtails begin breeding in April. The nest is placed in a location close to a fast-flowing river, usually between hollows, or nooks and crannies among stones and rocks; sometimes, they can be found within manmade structures and, typically, nests are lined with moss and hair. It is normal for a clutch to contain between three and six eggs; the incubation period last around twelve days with a subsequent fledging period of twelve days.

What is the difference between a Grey wagtail and Yellow wagtail? 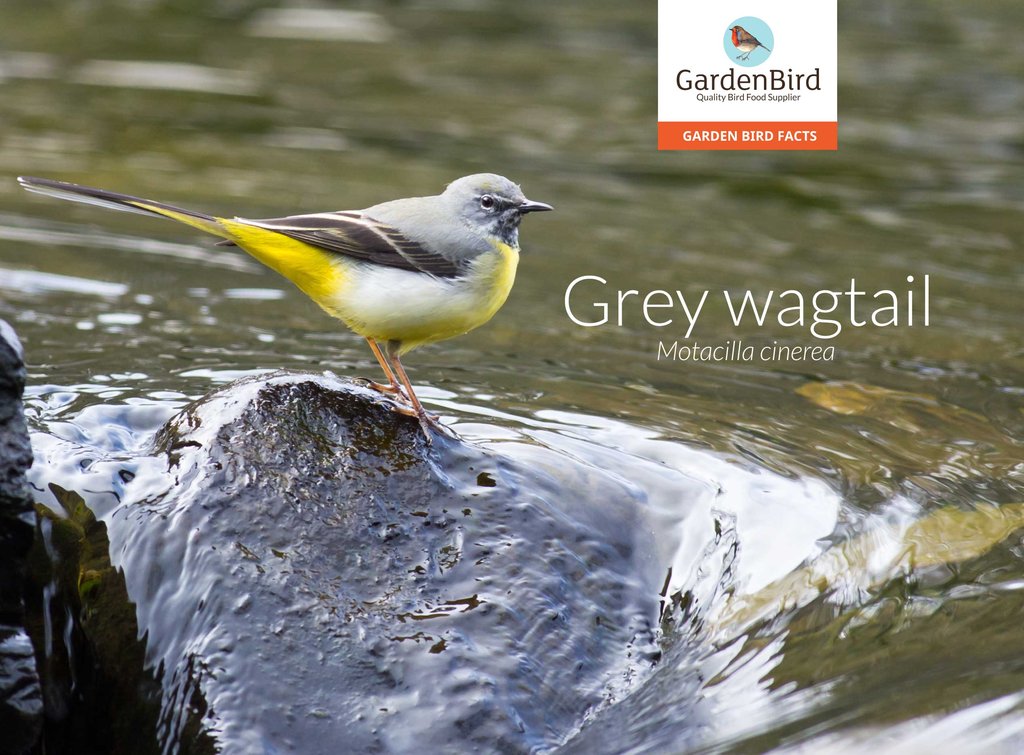