Save onBird Food
All about the Jay

Garrulus glandarius is a widely dispersed species of the crow family (Corvidae) that covers a large geographical region stretching from Western Europe to the eastern seaboard of Asia. The Latinate genus term, Garrulus, means noisy and chattering; the secondary term, glandarious, means “of acorns”, pertaining to the Jay’s habit of favouring acorns as part of its diet, a food the bird habitually stores over winter, although it does take to other common garden bird foods such as peanuts and seed mixes.

It’s exterior is a blend of pink and brown (a pinkish-brown), with an underbelly slightly paler, but of a similar hue; the wings are primarily black with some white patches and a striking blue-black striped feature, making them quite easy to spot in the garden.

They are resident in the UK all year round apart from northern areas of Scotland and the west coast of Ireland, altogether numbering approximately 170,000 breeding pairs (RSPB). Over winter, due to harsher winters and lower stocks of acorns, Jays do sometimes appear in the UK from northern Europe in “irruptions”, or sudden bursts of large flocks.

Jays nest and breed in large shrubs, laying typically between 4 – 6 eggs that have an incubation period of approximately 16 – 19 days. Both male and female Jays feed the young.

Jays are vociferous acorn eaters, although they do enjoy seeds and insects, and have been known to consume small mammals such as fledgling birds and bats; Often they will take blackberries and rowan berries, and sometimes discarded kitchen scraps. In the years preceding 1998, Jays rarely ever ventured into gardens; however, because of recent depleted stocks of acorns, it’s now possible to observe them quite frequently in the garden.

One specific characteristic of the Jay is their habit of hoarding and storing acorns for the winter period. Such behaviour has been linked to their high capacity and intelligence for anticipating different situations i.e. foresight and planning, a behaviour which distinguishes the Jay from other common garden birds. Research has shown that Jays can hoard and retrieve several thousand acorns over winter.

Because of their preference for acorns, it is often possible to find Jays residing near oak trees; in fact, coniferous and deciduous forests with an abundance of oak trees, and therefore a goldmine of acorns, will likely be home to a number of resident Jays.

The Jay is famed for its sharp rasping voice, which is pronounced when flitting from tree to tree in dense woodland areas. Should you hear it, look also for a white rump moving through the air, as this is usually a clear sign of a Jay. In the garden, Jays sometimes display an alarm call, which can be heard as a kind of “krar, krar” sound.

Aside from this, another aspect of intelligent behaviour is the Jay’s ability to mimic quite closely the sound of other birds; these mimics have been noted to be so similar to that of other bird species’ calls, it is almost impossible to tell them apart.

Intelligence of the Eurasian Jay

Jays are masters of planning, with incredible foresight and a depth of self-control unseen among many other birds species. What some people have called a purely robotic form of behaviour, something instinctive and hard-wired, rather than consciously processed (i.e. referring to the storing acorns for later consumption), scientists have revealed, through various ingenious experiments, a contradiction to this thinking.

In one such experiment, Jays were faced with a series of different foods (peanuts, raisins etc) to see if they could be sorted and stored onto various different trays. This the Jays did, showing a level of anticipation not before seen. The food was stored for later consumption, similar to cooking food for each lunch time over the following working week.

Other forms of intelligence displayed by Jays:

The crow and the pitcher

The Intelligence of the Corvidae family was observed 2,500 years ago by the famous Greek fabulist, Aesop. Here’s the tale, taken from the BBC website, about the crow and the pitcher:

One day, after a spell of hot weather which has dried up all the streams and ponds, the crow fears it will die of thirst. Coming upon a pitcher of water left in a garden, the crow tries to drink from it, but there is only a little water left in the bottom, and his beak can’t reach it. Having thought for a while, the crow hits upon the solution of dropping in pebbles until the water level rises sufficiently for him to drink.

The moral is: little by little does the trick

It is common for amateur birdwatchers to confuse Jays and Hoopoes, which are only ever passage visitors on the southern coast of England. See the difference below. 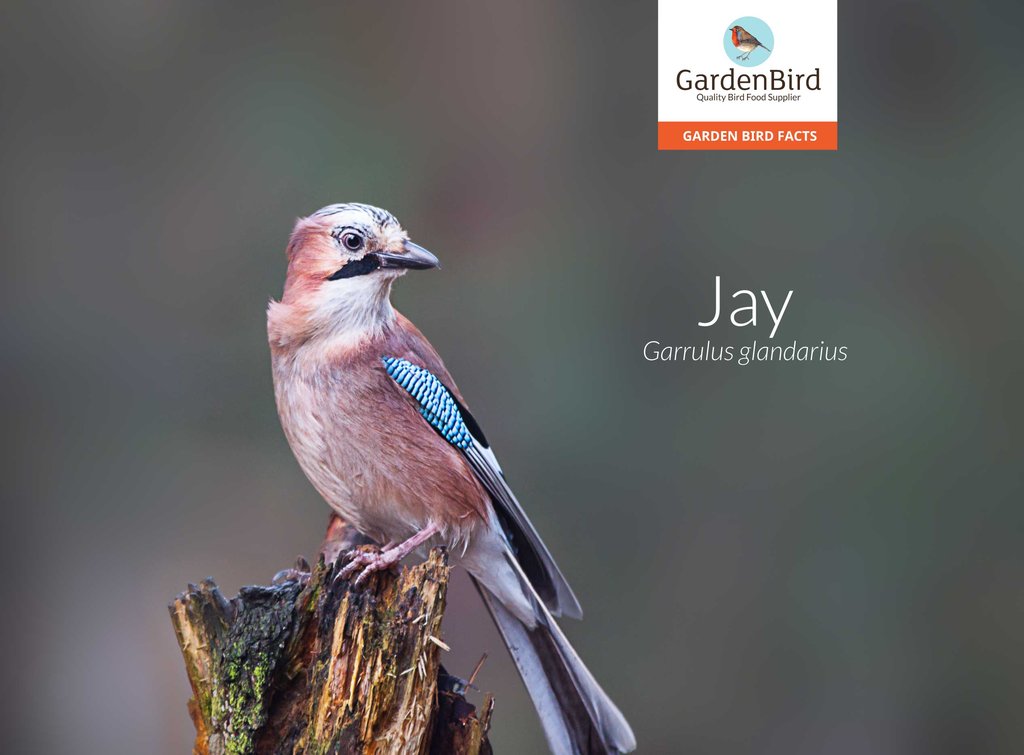 This hugely popular bird seed mix has been at the forefront of GardenBird for many years. A top seller, the inspiration came from a missing link in the bird food chain – a blend focussed on oil-rich ingredients.