Save onBird Food
All about the Lapland bunting Lapland buntings are not commonly sighted in the UK, only ever appearing in low numbers on the east coast, from Lothian in Scotland down to Kent in the south east of England. They are a species whose habit it is to winter in the UK, doing so from September and October until May, after which time they leave to breed in those colder northern European regions across Scandinavia. Their greatest concentrations appear in Lapland (hence the name), an extreme northern area of Finland that borders Sweden, Norway and Russia. Altogether in the UK, there are only very few wintering birds; according to the RSPB, just 710 breeding pairs in total, which is a tiny proportion of the entire global population. Finland, for instance, is home to between 50,000 and 150,000 pairs of Lapland bunting.

“The best time to observe Lapland buntings is between November and March,” RSPB.

They are somewhat well-built and stocky birds, finch-like in appearance, but with certain differing characteristics that deviate to some degree, like flatter heads, and slightly more elongated bodies. Lapland buntings also have a tendency to change over time, and certainly over summer, where the head of the male (black colouring) contrasts wildly with the rest of its body. At other times, you may notice how streaked Lapland buntings are; it is their well-marked heads, bodies covered in streaks and stripes, as well as “rufus brown napes” and white underbellies that help to identity them.

Lapland buntings are sometimes referred to as “Lapland longspurs”; however, it is more common to refer them as Lapland buntings. The Latinate “calcara” means spurs, whereas “lapponicus” refers to Lapland (region in northern Norway).

Lapland buntings have been present in Europe for many thousands of years; according to one study, almost 30,000 years, and it is unlikely they evolved in Europe, and therefore predates more modern linguistic taxonomy.

The diet of the Lapland bunting is really quite straightforward, consisting mostly of seeds in winter and arthropods in summer. Interestingly, Lapland buntings are known to consume between “3,000 and 10,000 prey items per day,” (Wikipedia). This is, of course, dependent on the energy and survival requirements at any one time throughout the year. If you aim to attract a Lapland bunting to your garden, besides needing to live in an appropriate place, you will need to ensure there is a healthy abundance of wild bird seed in your garden to stand a chance.

Despite their small UK numbers, Lapland buntings exist in abundance elsewhere, and are therefore classified as Least Concern.

Lapland buntings breed mainly on the high altitude tundra of Scandinavian countries, as well as the fells of Lapland in Finland. The nest consists of dry grass, small twigs, and is lined with reindeer hair and feathers. The breeding process occurs slightly later than other bird species in June, and usually only 3 eggs are laid. The incubation period last between 11 and 14 days, and it can take between 8 – 10 days for Lapland bunting to fledge fully.

What’s the difference between a Lapland bunting and Snow bunting?

These two birds are often confused with each other, although there are some major differences, the largest being the streaked appearance of the Lapland bunting,  whose chestnut brown gradients converge over the entire plumage. Snow buntings are also mainly white, with only small chestnut brown parts on the back. Take a look at the difference below. 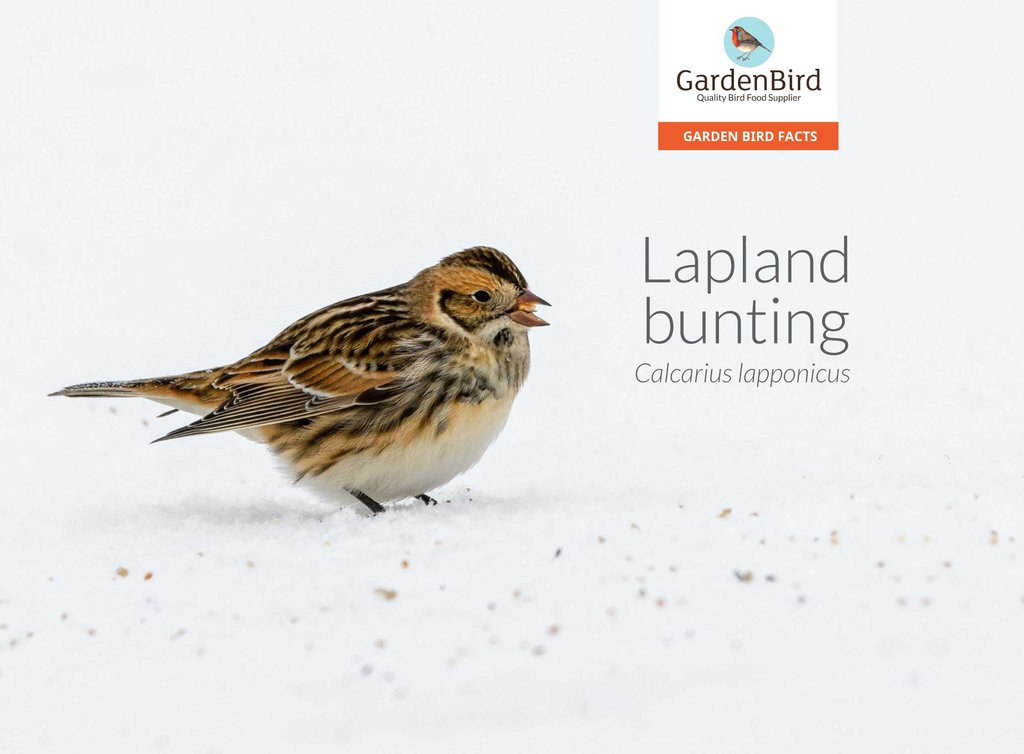