Save onBird Food
All about the Magpie As an omnivorous, voracious scavenger, the Magpie is firmly within the curious realm of what one could call the canon of contentious garden birds; a marmite, if you like, of love and hate, similar to the Jay, and anything but, for example, the gentle, loveable Long-tailed tit. But there are always two sides to the coin: yes, Magpies have been accused of stealing and consuming the eggs of innocent garden birds, but they have also been seen as incredibly adept at warding off similarly dangerous pests.

Over the past two decades and beyond, Magpies have shot up in number across the UK, and are now among the most commonly observed garden birds in the UK. But along with this rapid increase in population has arisen a most abundant form of hatred among people, and this is, apparently, put down mainly to their “cheeky behaviour”. This, however, can’t be the whole truth, and one author, Steve Roud, believes it could be related to the deep superstitions held in traditional British folklore, which links the Magpie to the devil. Despite this, they are often thrown in with crows as the ultimate reflection of evil in physical form: movies like The Omen do not help their case. In contrast to this, the Magpie is, in fact, the national bird of Korea, adored by many as being the harbinger of good fortune.

And of course black has traditionally been related to evil, dark spirits and wrongdoing, whereas white is angelic, holy and good: the Magpie is somewhat enigmatic in that it encompasses both these contrasting neutrals. Perhaps, as a consequence of such ambiguity, there is increased suspicion, and less trust.
But is this somewhat despised bird really so bad? Does it deserve, as the BBC have described it, “the bird people most love to hate?” Let’s take a deeper look at the Magpie, and you can decide for yourselves.

Magpies are not afraid of stepping out into open garden spaces, often making a bit of a mess of the lawn, and their almost arrogant, forthright method of strolling around is easily misunderstood. But look closely and you’ll notice something interesting; they are an incredibly beautiful bird. The clear black upper parts, whose attractive sheen is really quite striking, contrast well with the white breast to complete an evenly distributed picture of grace; and the tail, unbeknownst to many, presents a gradated green gloss, observable only from certain angles.

Magpies are resident all year round in most parts of Britain, apart from northern extremities of Scotland (Highlands); the total recorded breeding population has been as high as 600,000 (RSPB). Their breeding takes place in early April and it is common for just 1 clutch to be produced, containing between 5 to 8 eggs. The time it takes for Magpies to fully fledge can be anywhere between 22 and 28 days in total.

What does “Magpie” mean?

Pica is the classical Latin name for Magpie, although originally the collective name for Magpies was, simply, “pies”, meaning “pointed”. This was, most likely, in reference to the tail or beak. In a slightly unfair twist, the prefix of -pie, “Mag”, is derived from the name Margaret, used to describe women in general in the 16th century. Interestingly, because some considered the pie’s call to be similar to that of a chattering woman, the name Margaret and pie came together to form the modern term “Magpie”.

Magpies are probably the least fussy eaters of all garden birds: kitchen scraps, common bird food, entire rodents, insects, nestlings, eggs and fruit are among some of the food you may observe them consuming in your gardens. They have even been observed preying on rabbits, animals that are larger than themselves. With Magpies being of sound and intelligent mind, they have a tendency to hoard food for later, a form of behaviour common among the related Jay.

News has been made of Magpies eating the eggs and nestlings of smaller songbirds, but much of this is, in fact, a perfectly normal function in nature, as harrowing as it is to see. According to the RSPB, one study found that songbird numbers were no different in places where there were many Magpies from where there were few. 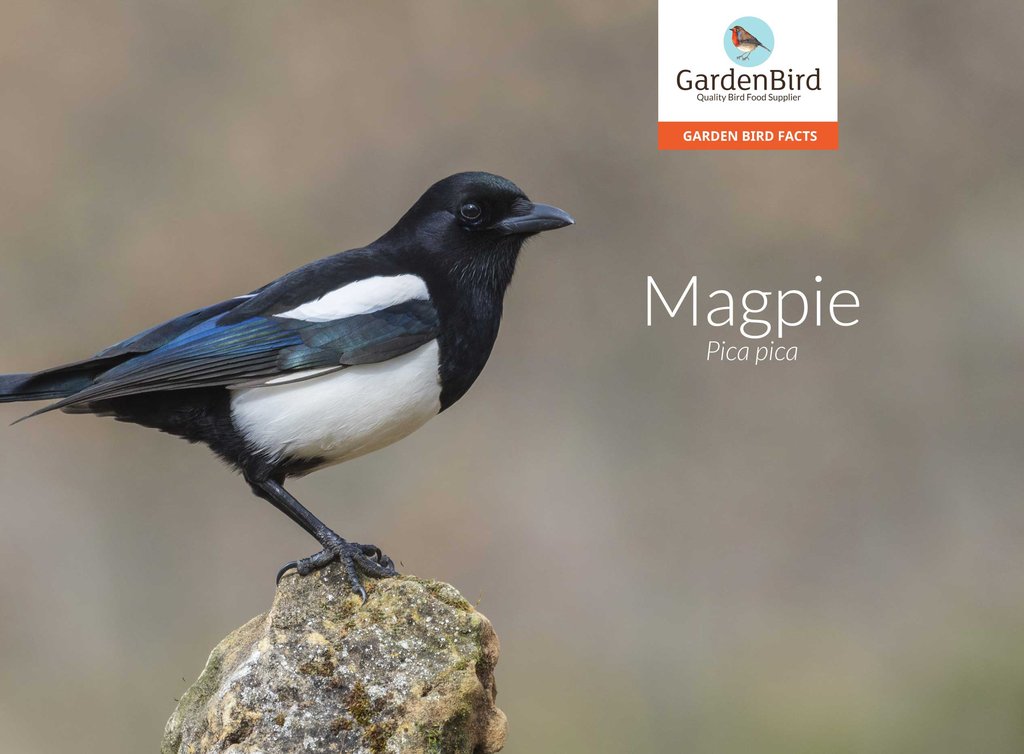 Attract Magpies with the following food