Save onBird Food
All about the Marsh tit As indicated by the name, the Marsh tit belongs to the tit family. In the UK, we have eight species of Tit – the Blue tit, Great tit, Crested tit, Coal tit, Bearded tit, Long-tailed tit, Willow tit and Marsh tit. Amongst these, the Marsh tit is arguably one of the more refined and elegant of the bunch – though it is easily confused with the Willow tit due to striking similarities in appearance. However, one key difference to note is the Marsh tit’s glossier cap, while you might also differentiate by its distinctive, sneeze-like song.
An interesting fact about the physical biology of the Marsh tit is that their hippocampus is notably large – even bigger than that of the larger, much heavier Great tit. The hippocampus is the part of the brain responsible for memory, which could indicate an increased ability to recall territories and safe places to feed.

If you’re struggling to tell the difference between a Marsh tit and a Willow tit, you’re not alone. Ornithologists didn’t actually realise they were two different species until 1897. Before this, only Marsh tits were officially recognised, with Willow tits being a late classification. Along with its glossy cap, Marsh tits have plain brown wings, with less contrast. On the contrary, if the tit you’re identifying has pale fringes on the secondary feathers visible on its closed wing, they would indicate a Willow tit. Despite what you might guess from the name, Marsh tits are found in dry habitats and are likely to appear in expansive broadleaf woodland, particularly in areas with prominent shrubs. They are also spotted in wooded areas around urban and suburban populaces.
In quite a romantic turn for nature, Marsh tits are monogamous and often find a mate for life. On a sadder note, as with many of our favourite bird species, the Marsh tit population is declining. Even if not as dramatically as some others, the Marsh tit still finds itself on the red list – the highest conservation priority, where species are classed as needing urgent action. The Marsh tit has seen a decline of over 50% in the last 25 years as they compete with urban development encroaching on natural resources and reducing safe roosting habitats.

A sneeze like song, with a series of high putch repeating notes, it might best be described as a “pitchoo” sound.

Marsh tits are more likely to appear on feeders in colder months, when food in nature is scarce. In summer they tend to mainly choose insects and spiders though have still been known to visit gardens. Put out an insect rich seed mix such as Ultiva Spring Delight to attract a range of birds, including our glossy capped friend the Marsh tit.

Hover over the image below to find out more about the Marsh Tit. 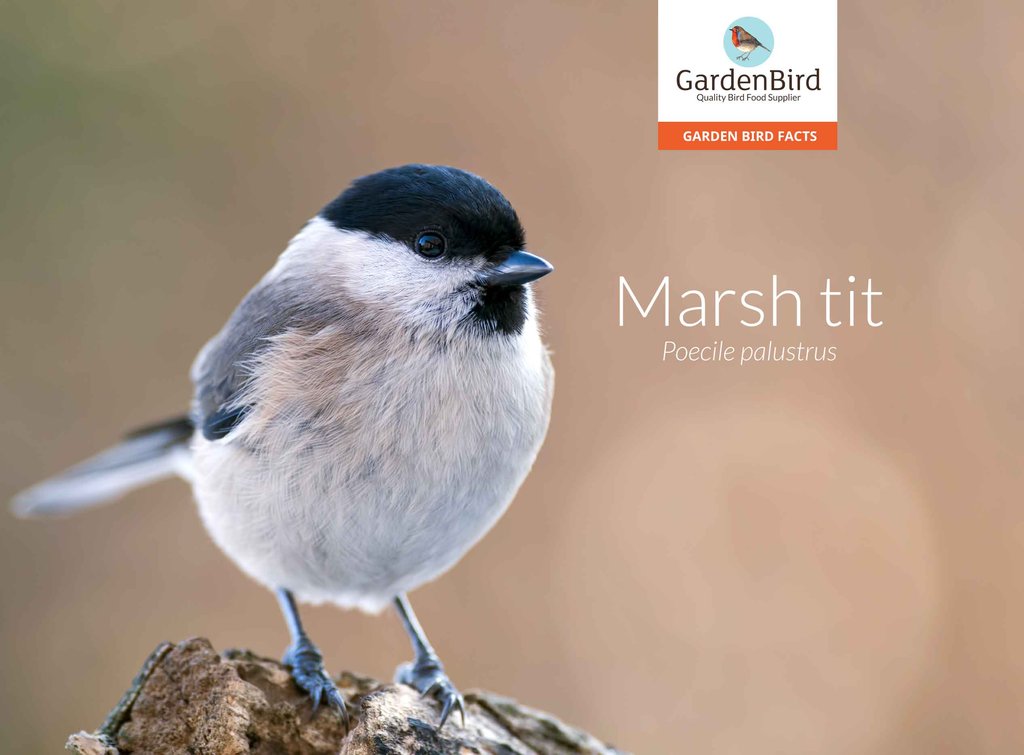