Commonly thought to symbolise the advent of Autumn, Redwings are migratory winter birds. Native to Eurasia, they mostly return to the UK in October and November in large flocks, leaving again in March and April.
With a striking ginger-red underwing, it’s not difficult to see where the Redwing derives its name from. Small in size, soft and plump, they are typical in appearance to other birds of the Thrush family (Turdidae), the family to which they belong.

A true thrush is a medium-sized bird belonging to the Turdidae family.

How to identify a Redwing

Not to be confused with Song thrushes, which can weigh over 100g, Redwings are the UK’s smallest true thrushes, weighing in at just 50-75g. They are identifiable not only by their red underwings, but also by their creamy-white, conspicuous strip (supercilium) above the eye. If you are lucky enough to encounter a rare sighting of a Redwing in your garden, look out for these distinct features.

Determining the sex of a Redwing based on aesthetics can be a challenge; both characterised by olive brown backs and white breasts with dark spots and streaks. Keep a close ear out for the typical Thrush-like and varied song of a male Redwing marking their territory from the treetops. The typical call of a Redwing follows a high-pitched ‘seeze’ sound but, during flight, they tend to vocalise using a lower-pitched twitter.

The Redwing migrates after dusk in clear skies, so if you are fortunate enough to recognise these sounds of an October evening you may well be within close proximity of a flock of Redwings preparing to settle in their UK wintering grounds.

Wild fruits, berries and mealworms are common ingredients in a Redwing’s diet, hence they are typically spotted roaming across the British countryside in hedges and open fields. Rarely visiting gardens, extreme weather conditions such as heavy snowfall can often force Redwings into the more domestic environments of a home garden in pursuit of food. Its name – Turdus iliacus – dates back to 1758 when Swedish Zoologist, Carl Linnaeus, referred to the species in his book Systema Naturae. Facts about the Redwing

Whilst Redwings are not considered to be globally threatened, harsh winters and wet summers can have an adverse effect on UK Redwing populations. The current UK resident population stands at 690,000, although this is, unfortunately, in decline.
Yearly fluctuations of this figure means that there remains an element of ambiguity around the exact number of Redwings, but it is well-believed that, regrettably, climate change may lead to the eventual loss of this, already-tiny, breeding population (4-16 pairs in the UK). 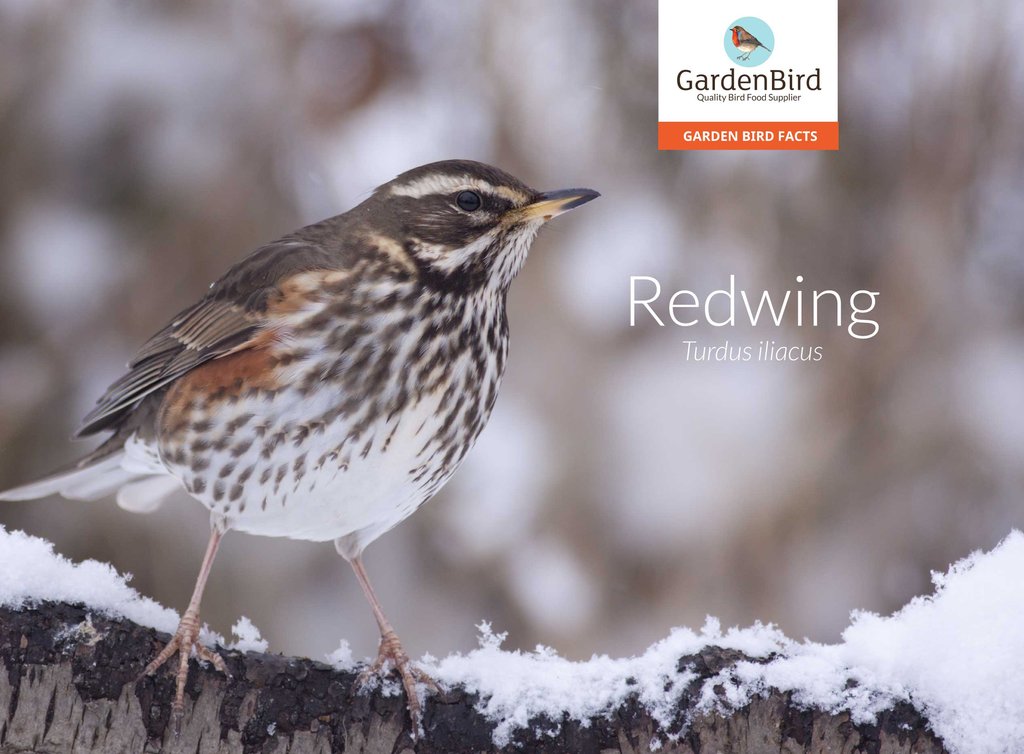 Attract Redwings with the following food

Dried mealworms are the perfect nutritional food for your garden birds. Ideal for attracting species such as Blue tits, Starlings and Blackbirds, dried mealworms can be soaked in water over night for an extra juicy treat for your birds. Or, simply place on a flat bird table feeder or on the garden floor for attracting ground-feeding birds.