Save onBird Food
All about the Rook The rook, also known as Corvus frugilegus, was given its binomial name in 1958 by Carl Linnaeus. The binomial is from Latin, Corvus is for “raven” and frugilegus is Latin for “fruit-gathering” (from frux, frugis, “fruit”, and legere, “to pick”). However, the English name is ultimately derived from the bird’s harsh call.

The population of rook’s has been increasing slightly year-on-year, and seems to have adapted to the various changes in agricultural practices that many other species have been adversely affected by.

Rook’s are typically 45 – 47 cm in length, similar in size to the carrion crow, although sometimes slightly smaller. However, the rook is more untidy in its appearance.

This species have black feathers which often show a blue or bluish-purple sheen in bright sunlight. What’s more, the feathers on its head, neck and shoulders are especially dense and silky.

Also, rook’s legs and feet are generally black, and the bill grey-black in colour. The feathers of a Rook

You can distinguish a rook from other similar members of the crow family because of their bare, grey-white skin around the base of the adult’s bill in front of the eyes. The rook’s bill is also longer and more pointed than that of the carrion crow. Also, the feathering around the legs look laxer than the congeneric carrion crow.

However a juvenile rook is similar to the crow, which may cause some confusion. It lacks the bare patch at the base of its bill, and it has a thinner bill and loses the facial feathers after six months of age. On rare occasions, leucistic rooks can be observed; these generally have brown feathers, pink legs and bills, and sometimes cream plumage.

Rooks also occur as an eastern race in Asia, where they differ in size, being slightly smaller on average, and having a more fully feathered face. In the north of its range, Rook’s have a tendency to move south during autumn though more southern populations are apt to range sporadically also.

In addition, this species has been introduced to New Zealand, with several hundred birds being released there from 1862 to 1874. Although their range is very localised, rook’s are now regarded as an invasive pest and are the subject of active control. However, the ecological and economic impacts of rooks in New Zealand have not been well-studied.

Rooks nest in a colony called a rookery. The nest is built high in a tree close to other nests, with previous years’ nests even being reused. The nest is usually bulky and made from twigs bound together with earth, lined with moss, leaves, grass, wool and even hair.

The hen lays and incubates eggs that are smooth, glossy and light blue, greenish-blue or green with dark spots. Eggs are around 40mm long, and both parents feed the young after they have hatched.

Breeding takes place in March and April, with 3 to 9 eggs being laid and then incubated for 16 – 20 days.

A rook’s call is usually described as kaah; it is similar to that of the carrion crow, but with a somewhat flatter tone. You can hear it given both in flight and while perched, and the bird fans its tail and bows on each kaah.

You will notice that calls in flight are usually given singly, in contrast to the carrion crow which are usually in groups of three or four. Solitary birds often ‘sing’ seemingly to themselves, uttering strange clicks, wheezes and human-like notes.

Like other Corvidae, rooks in urban or suburban areas will sometimes favour sites with a high level of human interaction, and can often be found scavenging for food in places such as theme parks and city centres. However, the rook’s diet, like most crows, varies and includes insects, worms, carrion and seeds. They will visit bird tables for scraps and fruit, as well as feed on earthworms and insect larvae by probing the ground with their strong bills. 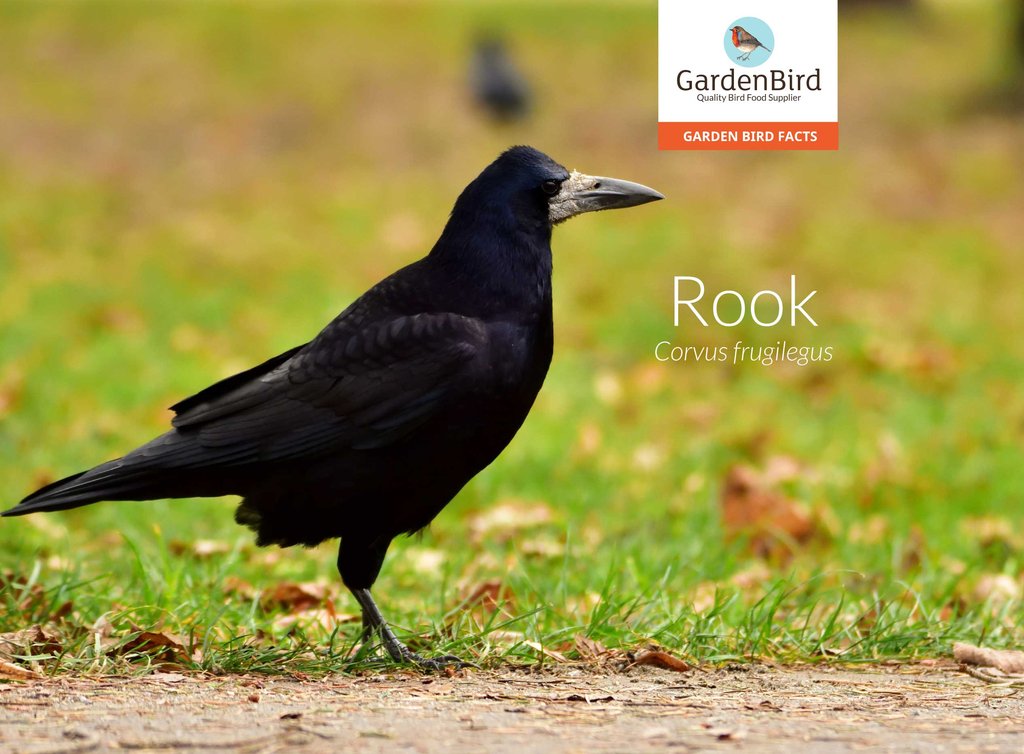 Attract Rooks with the following food