Save onBird Food
All about the Song thrush

The Song thrush (Turdus philomelos) – Turdus meaning “thrush” – is a highly characteristic bird with a memorable, repetitive birdsong. Being smaller than Mistle thrushes and Blackbirds, you’ll notice the speckled breast, a feature of the bird that makes it distinct from other garden birds. The eyes of the Song thrush are relatively large in comparison to other birds; their plumage is mainly brown with a golden-coloured breast.

Song thrushes are resident all year round in the UK, and they reside primarily in forest areas with good undergrowth, although they do frequent parks and gardens throughout the year. It is not a particularly gregarious creature, and may only loosely be associated with other thrushes, such as Blackbirds and Fieldfares.

The Song thrush is distinct in voice, which is presented proudly while the bird stands in its usual position up high, sometimes resting on a chimney pot, a lofty branch or some other elevated perch. You’ll notice a repeated phrasing, which features velvety flute-like timbres with subtle, clear and mellow qualities. When asked about their favourite bird song, many people report the Song thrush as the one they most enjoy. The poet Robert Browning wrote favourably about the Song thrush’s voice, using the lines (from Home-Thoughts, from abroad):

That’s the wise thrush; he sings each song twice over,

Lest you should think he never could recapture

Such is the fame of the Thrush song that its cousin, the Hermit thrush (Catharus guttatus), has such beautiful notes that it has been compared to the wonderful sounds of a woodwind instrument. In fact, according to an article on the Smithsonian website, the Hermit thrush shares mathematical qualities that relate to their preference for singing in harmonic series, which is a fundamental component in human music. If there is a bird of a musical family, it is the Song thrush.

The Song thrush diet consists mainly of invertebrates, and they have a specific leaning towards the consumption of snails, with an intriguing way of coaxing out the soft body: the bird holds the snail in its beak and enthusiastically smashes the shell against a hard surface to get to the soft part.

Over winter, when the ground is set hard by cold frost, earthworms can sometimes be difficult to find, as the soil can become almost impenetrable.

To help, live or dried mealworms can be an ideal replacement for this food, providing an equal amount of nutrition for the Song thrushes visiting a garden. Be sure to use a good mealworm feeder, as this would provide easy access for the birds.

Over autumn and winter, particularly if there has been a good autumn harvest, Song thrushes can feed on the fruits of trees and shrubs, such as berries and seeds. It’s also interesting to note that Song thrushes prefer to feed under cover, unlike Mistle thrushes whose less shy nature allows them to wonder out in the open to feed.

Song thrushes are classified as Red List status (RSPB), which means they are a globally threatened population; one of the criteria to be met for Red List status is a 50% decline (UK) over the past 25 years. According to BTO statistics, the Song thrush has declined by more than 50% between 1970 and 1995 and, although no solid reason has been given for this decline, many in the profession of ornithology believe it could be due to the loss of preferred feeding and nesting habitats: fewer hedgerows, increased drainage and tillage have reduced the abundance of invertebrates, a critical part of the Song thrush diet.

There is an informative RSPB article into the decline of Song thrush. Read it here.

Hunting in the Mediterranean is still on-going today, but is not considered a contributing factor to the decline of the Song thrush throughout Europe. In fact, the use of Birdlime, a substance used for trapping birds, in Valencian culture (eastern Spain, around Alicante) is accepted and legal, although the practice is abhorred in most areas of Europe and considered cruel and unacceptable.

The Song thrush is featured on the West Bromwich Albion FC crest. The name The Throstles, a nickname for the team, was used because the public house in which the team used to get changed kept a pet Song thrush in a cage. Read more about the history of the Song thrush in football here. The Song thrush has featured prominently in various cultural scenarios, including the above mentioned poem by Robert Browning, as well as that by Thomas Hardy, the Darkling Thrush, in which Hardy contemplates a bleak future; an aged man (Hardy) leans over a coppice gate and see ghosts of the past, with little hope for the future. You can read the poem here.

The Song thrush is also mentioned is Homer’s Odyssey, referencing their capture for food: “Then, as doves or thrushes beating their spread wings against some snare rigged up in thickets—flying in for a cozy nest but a grisly bed receives them.” 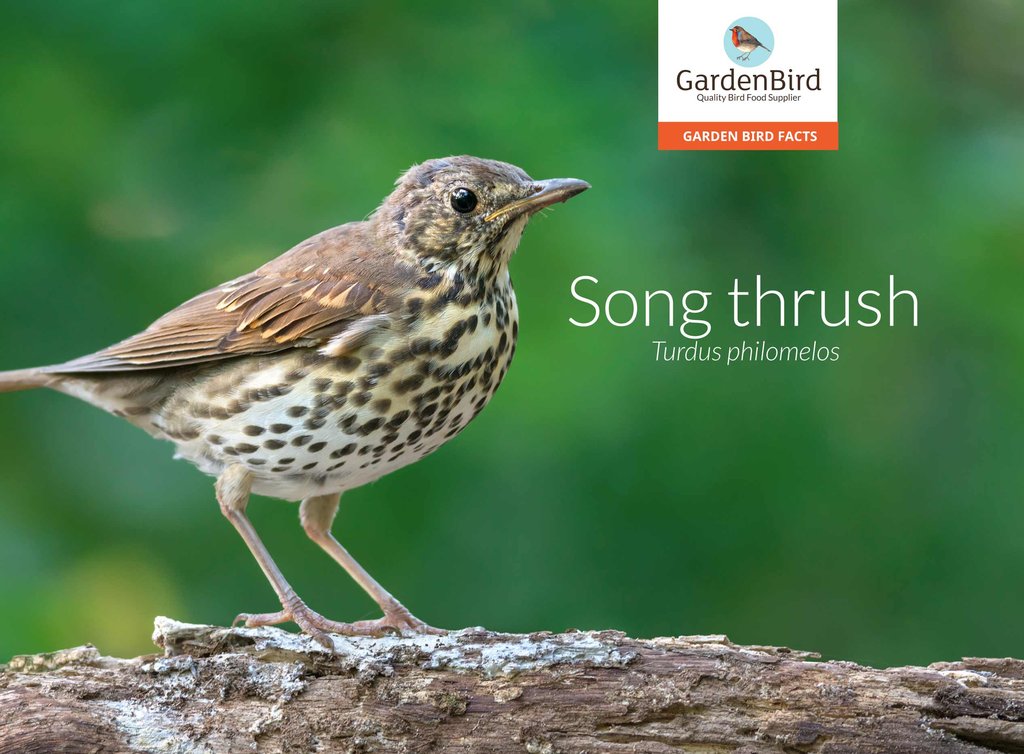 Ideal for attracting species such as Blue tits, Starlings and Blackbirds, dried mealworms can be soaked in water over night for an extra juicy treat for your birds. This versatile mealworm feeder enables you to efficiently feed your garden birds and the adjustable dome allows you to choose what size of bird feeds from it. The 2 Port Mealworm Feeder with tray is made specifically to feed dried mealworms and complete with a tray to prevent these tasty morsels ending up on the floor. Live mealworms are an ideal replacement for worms and grubs from the garden.

If you interested in purchasing live mealworms, please call our customer services team on 0800 6444 322.