Save onBird Food
All about the Whinchat

The Whinchat is a small, colourful bird that is a migratory relative of the Stonechat and Wheatear.

It has a bold white stripe above its eye that makes it very distinctive but despite their bright colours, they are often heard before they are seen as it often perches on high vantage points drawing attention to itself with a scolding call.

It really is a real birdwatcher’s bird with its big head, short tail, prominent plumage and subtle song. Unfortunately it has a Red Status on conservation importance according to RSPB.

Birds classified in the UK as Red List species have the highest conservation priority and Whinchat numbers in Britain have more than halved between 1995 and 2008, the cause being suggested as to the loss of farmland habitats.

Whatever the cause(s) of the decline, it’s not just limited to the UK as European bird trends show that numbers have fallen by 55% across Europe since 1982.

A little smaller than a robin, the whinchat is a small perching bird that has an average lifespan of two years.

The males appear brighter in colour than the females whose features are less vivid, but both are mistaken for resembling its relative the Stonechat. However, the biggest difference is the bold white stripe above the eye.

It has a streaky brown and black head, brown back, and a warm orange-buff breast. Juveniles look like a pale washed-out version of their parents but will still have the noticeable stripe above the eye. Whinchats also have pale patches at the base of the tail whereas stonechat tails are all dark.

Chats tend to hop around on the ground or perch on top of low bushes which makes it an enjoyable bird to watch. Its soft call will resemble “hueet-tic-tic, hueet tic-tic, tic-tic”.

Whinchats can be seen in an array of habitat types including coastal, farmland, grassland and heathland. They like to live in open country and breed in the north and west upland areas, so it would be a surprise to see them in your garden!

It is a summer visitor after arriving from wintering grounds in Africa and the Middle East, so can be spotted in the UK from April to mid-September.

They’re more prominent in Wales and Scotland and can frequently be seen sitting on fence posts or small bushes.

In the autumn and winter months they also feed on berries and some seeds.

The current Latinate name, Saxicola rubetra, can be broken down as follows…

The English name originates from ‘whin’ the common gorse (a species of flowering plant in the Fabaceae family) and ‘chat’ referring to the nature of its call.

What is the Winchat’s nesting behaviour

Breeding season takes place March-June and the clutch size is 2-7. The eggs are pale blue-green with red-brown specks, around 14-19mm in size.

The nest itself you would find on the ground, made from moss and grass and lined with hair.
It is the female that builds the nest and incubates the eggs but the young are fed by both parents.

Which chat is the most popular

Whilst researching the Whinchat, we came across various pieces of information around its relatives-the Stonechat and Wheatear. So it crossed our mind, who is the most popular bird in the Chat family?

Google reveals that on average, the Stonechat is the most searched for member of the family, followed by the Wheatear and then Whinchat. Over the last 12 months, interest has declined nonetheless, this is expected to spike in August-September time, outperforming its relatives.

Now no fights over the bird table please… 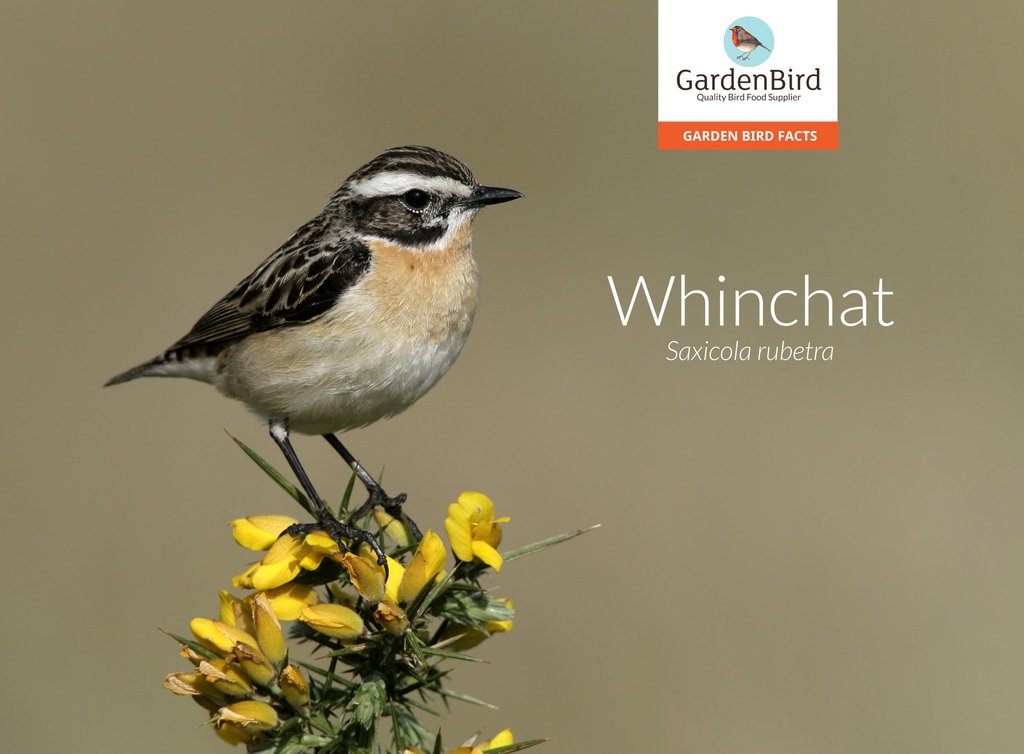 Whinchats and Stonechats are very similar in appearance, but there are some subtle differences. See if you can spot them all below in the comparison Attract Whinchats with the following food