Save onBird Food
All about the whitethroat

Whitethroats are medium-sized warblers, and are known by their Latinate name, Sylvia communis i.e. Communis is Latin for “Common”, separate from the Lesser whitethroat, which has subtle yet different features (see the comparison below to see the difference between Common and Lesser varieties).

You’ll find the Common whitethroat features a distinct and lengthy tail, which is flicked quickly. Its head is grey, the throat is white, and there is a uniform brown back with buff underparts. It is a very lively bird that is renowned for its “scratchy” and jolty song, which can be heard from the tops of hedgerows, a favoured place. They are also known for their curiosity, which is evident by their boldness to investigate disturbances in near surroundings. If there is a threatening intruder, the Whitethroat will usually try to fend it off with an aggressive, rapid churring call. Because the bird appears in a number of areas around the world, it has been given a number of names, including “nettle creeper”, “beardie” and “hay jack”.

You wouldn’t normally discover a Whitethroat in your garden, as they prefer the open country. Yet saying this, there have been reports of Whitethroats entering garden spaces, so there’s every chance you might observe one at some point.

Whitethroats are passage migrants to the UK, preferring the warmth and comfort of southern climes as their wintering ground, which is, interestingly, the Sahel Region just south of Sub-Saharan Africa. The Sahel Region is a belt of land that spans the 3,360 mile length from the Atlantic to the Red Sea. It was here in the late 1960s that Whitethroats experienced one of their greatest challenges for survival: a severe drought which led to a huge population loss, which, studies reveal, affected as much as 85% of the total Whitethroat population. Although in general Whitethroats have recovered significantly, the British population has never returned to their previous numbers prior to the drought. Whitethroats build their nests primarily out of dry grass and roots, the lining of which is made from wool, finer roots and/or plant down. The nest is usually built in low shrub or brambles and among bushes in the open country. A typical clutch consists of between four and five eggs, with a hatching period of approximately eleven to twelve days. It is the duty of both males and females, which take responsibility in turn, to incubate the eggs and, once hatched, the subsequent fledgling period takes place around twelve days later.

The Whitethroat diet varies throughout the year, depending on circumstance. For instance, during the breeding season they will favour insects, whereas on autumn migration, and while on their African wintering grounds, they prefer to eat berries. 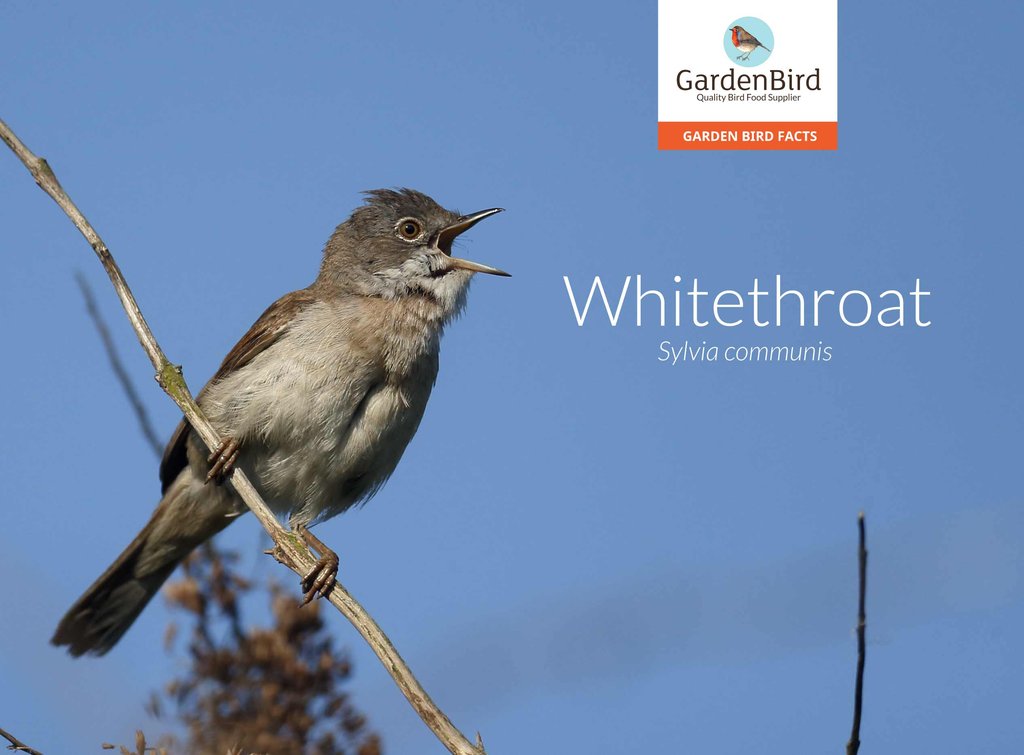 What’s the difference between the Common and Lesser whitethroat?

Look for these differences between the Common and Lesser whitethroat.