Save onBird Food
All about the Wood pigeon

Before we delve into any level of detail regarding Britain’s most preeminent pigeon, let us begin by asking a contentious question: should “wood” and “pigeon” be separate, as two words, or together, as one?

Let’s approach this with reason, and look for authority as guidance; and what better example should we discover than that of both RSPB and BTO. Yes, a quick search in Google yields the following answer, which, interestingly, is taken from Wikipedia, whose usage separates the two words. But take a look at RSPB and BTO, both of which organisations use “Woodpigeon” as the standard term. This is very interesting, because in fact there’s a clear trend towards the use of “Wood pigeon” (separate), rather than “Woodpigeon” (together), which is in decline. Could this be the mighty power of Google influencing our language? Quite possibly, and I shall let you decide whether or not that is the case. But for now, we shall go with the general trend, and stick with “Wood pigeon”, separated. Preemptive apologies for this!

Increased trend in the use of “Wood pigeon” since 2008

As to your thoughts on this, we would love to know…

The Wood pigeons is, without a doubt, the most common type of pigeon to appear in gardens across the UK. It is a big and burley animal whose pleasant grey colour contrasts nicely with the striking white patch on its neck. In fact, white is quite a feature of this animal, particularly in flight when those white wing bars are exposed on a clear day. It is ever more memorable when combined with the loud beating of its wings, a sound which is ever more present in forest areas, where the bird is traditionally shy; you might hear the sound of its wings flapping, and the occasional rustle of leaves up high, but you might not see the bird directly. What is most familiar with the pigeon, though, is its cooing sound, which is somewhat distinct from other birds in the garden. In fact, there are just five notes in total, and they go like this: “ru-hoo ru ru-hoo.” Try counting the sounds next time you hear a Wood pigeon in your garden.

The other interesting feature about Wood pigeons is their size. They often come across as slightly overweight, and one consequence of their size is the manner in which they walk. It isn’t straight, but a waddle, which gives the impression that they possess over-sized bottoms. This isn’t the case, of course, and it is a fact that the total weight of all the feathers combined is greater in weight than the entire skeleton.

The Wood pigeon has taken on various different names over the centuries with, of course, regard to differing regional nomenclature. For instance, in the southeast England, it is commonly known as a “Culver”, elsewhere it can be called Woody, Cushy-do and/or Quist.

The current Latinate name, Columba polumbus, which sort of rolls off the tongue, can be broken down as follows: Columba is the Latin for “pigeon or dove”; and polumbus is the ancient Greek for “a diver”, which is, in turn, derived from kolumbao meaning “to dive, swim, or plunge”.

So, a “swimming dove”, which is in a way quite accurate, as the Wood pigeon does take on a type of swimming movement as it beats its wings through the air.

Ancient Greek for Columba, which means “a diver”

Wood pigeons are, perhaps, the least fussy eaters of all common garden birds. They will pretty much eat anything put out on the table, but there are one or two types of food Wood pigeons favour. Put out seeds and grain, and they will swoop down in excitement, even to the detriment of other garden birds. Their sheer size allows them to push away smaller birds with ease so, pay attention, as you might find your Wood pigeons dominating the feeding table.

They also drink a lot of water because of their relatively dry diets; however, take note that Wood pigeons only drink from open places, like bird baths. They, unlike other garden birds, whose habit it is to scoop up water and fling back their heads to allow water to “drop down”, suck up the water using their beak as a straw. It is quite a unique phenomenon.

Wood pigeons prefer the privacy of wooded areas for nesting and producing young. Never do female Wood pigeons lay more than two eggs per clutch, although should those eggs be destroyed, eaten or stolen, further clutches will be produced within a season, allowing successive generations to continue the family line.

The nest itself is built by both mother and father, and is a co-ordinated mass of twigs located in either a tree or high up on a building. The eggs are incredibly smooth, glossy white and have a width and length of 30mm x 41mm. Wood pigeon eggs in a nest 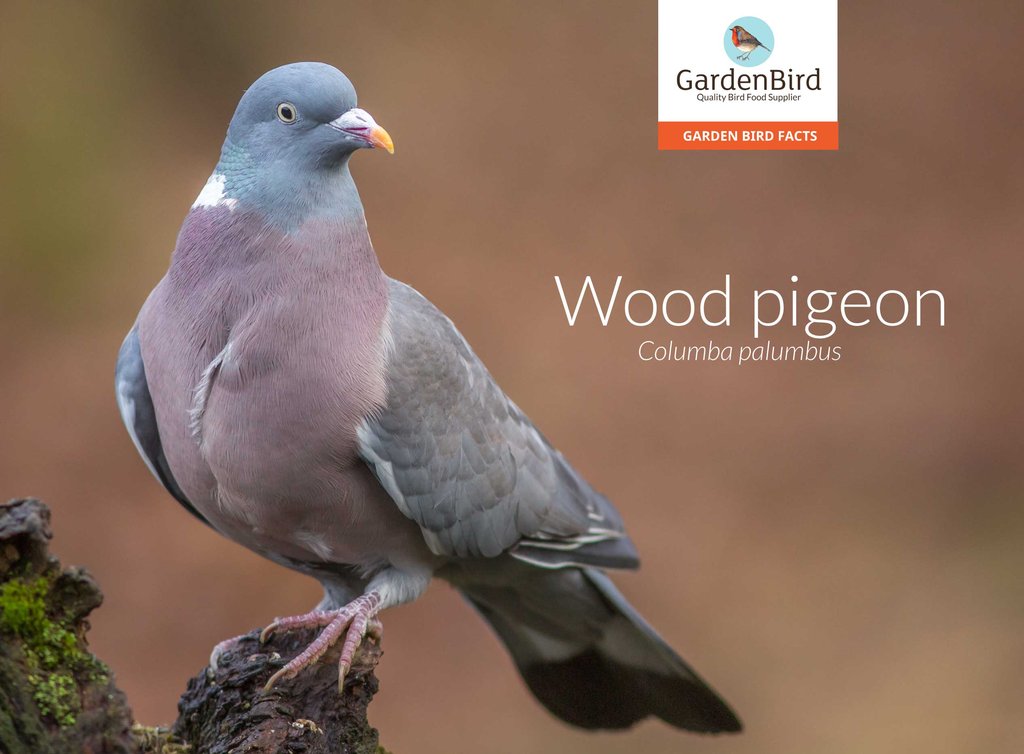 A beautiful and striking bird bath made from frost resistant ceramic with a blue glaze and natural terracotta rim. Two terracotta birds are perched on the rim of the bird bath, also comes complete with two terracotta stones to give birds easier access to the bath.