Save onBird Food
All about the Yellowhammer

Male Yellowhammers feature bright yellow colouring on their heads; in fact, this colour covers most of the body whose underparts have a dark streaked pattern. Females, in contrast, are duller in colour and are somewhat brown-looking birds. They are approximate in size to a common House sparrow.

They are a part of the Buntings family, which are characterised to a degree by their finch-like appearance; yet for a slightly different bill structure and flatter heads, they are different. They are also renowned for their lengthy bodies and tails, which give them a memorable aspect.

Unfortunately, Yellowhammers have experienced a considerable decline over the past 25 years, and therefore have been classified on the Red List as a species of considerable conservation concern. Much of this decline has been put down to variable farming practicing, such as the sowing of crops in autumn, thus reducing supply over winter. In the UK alone there are 710,000 breeding pairs, which put the population of Yellowhammers at a considerably low level.

The Latinate term Emberiza citrinella is derived from the old German embritz, which means bunting; the term “citrinella” is the Italian word for little yellow bird.

Yellowhammers feed mainly on seed and insects, and therefore the best possible chance of attracting them into the garden is by using seed mixes that contain a blend of oil-rich seeds (sunflower hearts) and kibbled maize (crushed/broken corn). This is particularly so over cold winter months and into spring when natural crop supplies may have been affected by the weather. Out in the wild, they favour farms and hedgerows where they can access similar types of foods.

Yellowhammer breeding begins in late April, and typically around two or three clutches are produced, each containing approximately two to six eggs, which are smooth, glossy and feature purplish markings. The incubation period lasts around thirteen days, after which they can take up to sixteen days to fully fledge.

Yellowhammer nests are usually placed low on the ground, among hedgerows or woodland fringes. They are built solely by females and contain a mixture of different building materials, including various plant matter, dry grass, stalks and leaves. The lining is typically comprised of fine grass and animal hair.

Yellowhammers don’t often come into the garden, but if they do greet them with plenty of seed and a smattering of kibbled maize.

The yellowhammer, trailing grass, will come

To fix a place and choose an early home,

With yellow breast and head of solid gold.

The Yellowhammer’s song, which is comprised of a series of short notes that gradually increase over time, has apparently been an influential factor in Beethoven’s writing of the powerful four-note opening motif in his incredible 5th Symphony (as everyone knows: short-short-short-long). Accordingly, the Yellowhammer “theme” was used in two piano concertos, No. 21 in C major and No. 23 in F minor.

What is the difference between a Yellowhammer and a Yellow wagtail? 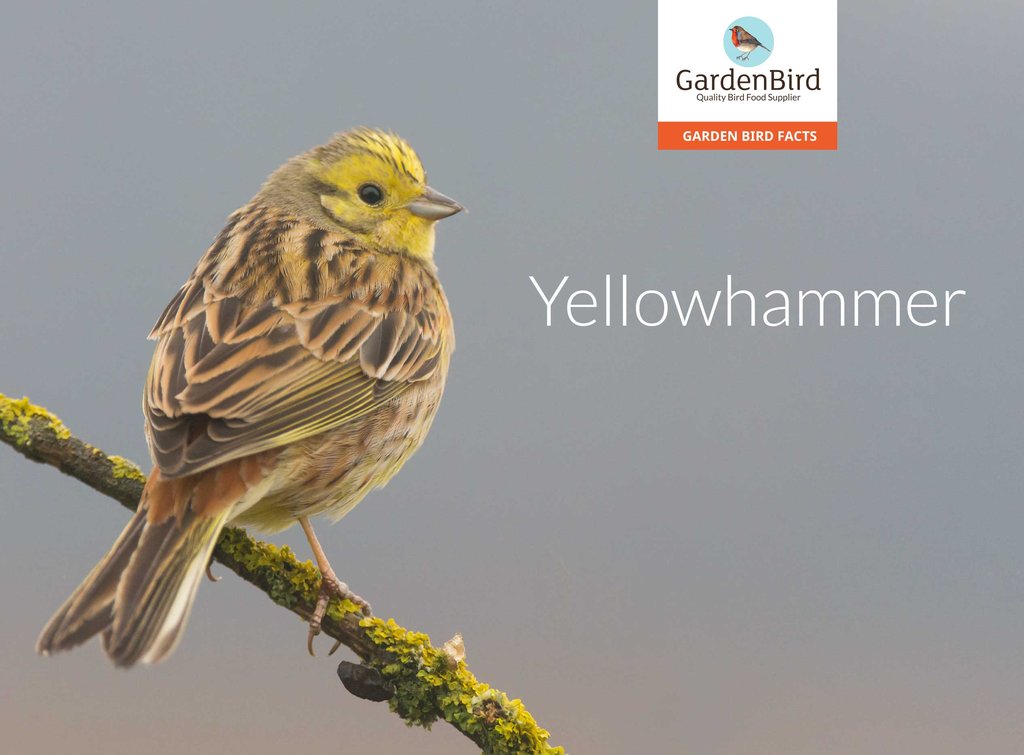 Variety is the spice of life, they say, so this premium bird seed mix was developed with a few things in mind: a good dose of energy with nutritious ingredients such as sunflower hearts, and a peppering of over ten other types of seed and grain. Kibbled maize is cracked maize in granulated form. High in carbohydrate and oil, its small size makes it easily digestible and therefore ideal for smaller species. A good all round ingredient for food mixes, it is enjoyed by numerous different types of garden visitor.