10% OFF your first order with GardenBird

Birds have created an incredible support system to keep their chicks incubated as they grow. The eggs are powerhouses of nutrition packed with protein, vitamins and minerals.

Dissimilar from many animals, female species of birds only have a single ovary and oviduct (tube). Once the fertilised egg cell leaves the ovary it travels down the tube. As it passes, the cell is coated with a layer of albumen and later the shell membrane to arrive at the uterus where the outer shell begins to form with pigmentation caused by movement. Therefore, adding unique markings to the shell.

The average bird embryo (chick) quickly develops over approximately 15 days, feeding on the yolk, a rich fatty food source. The white of the egg (albumen) is the chicks water supply and also acts as protective lining. Each embryo is suspended by strips, just like ropes to help it stay above the yolk. The porous shell supplies oxygen and warmth, radiating from the adult birds.

Our British Blackbird will wait until all her eggs are laid, before sitting on the nest to incubate her eggs. However, she will sleep on guard nearby the nest at night. The laying period usually takes approximately 4 days with only one egg being laid per day. During the incubation period, birds will sit on the eggs for several hours and only leave for food and water. To avoid adult birds leaving the nest for long periods in search of food, hang extra bird feeders or ground feeders near the nesting site. 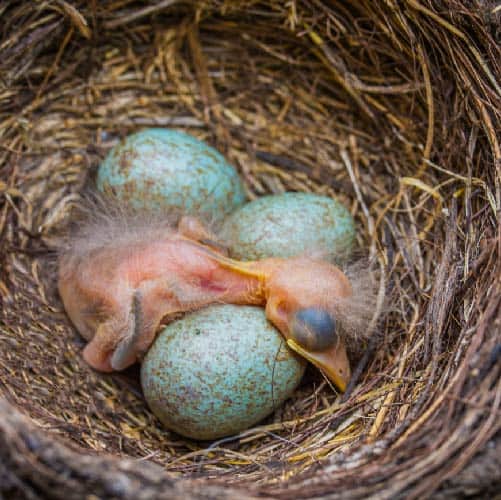 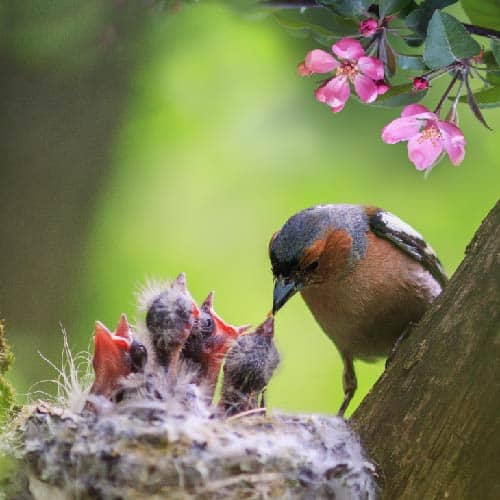 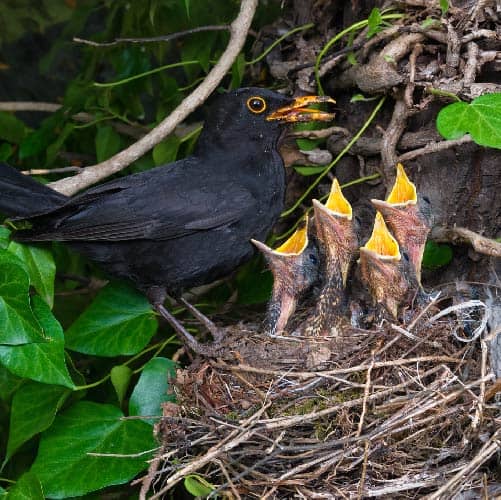 During the incubation process it’s mainly the female bird’s responsibility of keeping the eggs warm to help the chicks develop. The female has a brood patch which forms before the breeding season to cover the eggs. The patch will regulate the temperature to about 37°C. She will rotate regularly to make sure the heat is steadily distributed. This will recede eventually before the breeding season ends. Occasionally some male bird species will share the task of incubating the eggs but only for a short period as the female recovers.

Each chick inside the egg has a bill that features a hard tip called the egg-tooth, which helps them break out of the shell. The chick will frequently tap its bill against the shell until it begins to crack and eventually pushing its tiny head outside. Then using its body weight, it forces the shell to separate in half. The nestlings will hatch blind and helpless, so will instantly look for help and support of their mother and require food to build their strength since emerging from the eggshell. As the nestlings grow, they begin to lose the egg-tooth in as little as a few days, or even weeks depending on the species.

To help the birds feed their young, we’ve formulated a special Fledgling Mix which has everything they need to give them the perfect start in life.  Sunflower Hearts are a good all year round feed and loved by most birds, making them a great choice for your feeders!

Please avoid feeding whole peanuts during Fledgling season, as the smaller birds can potentially choke on these.  You could instead feed the foods mentioned above, or switch to Peanut Granules.